(CNN) -- Parts of the Northeastern United States faced freezing temperatures Tuesday morning, a day after a winter storm clogged roadways, cut electricity and dumped as much as 15 inches of snow. 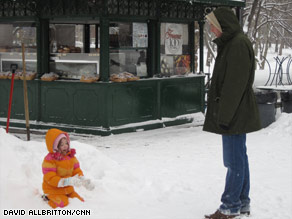 A girl plays in the snow Monday in New York, where schools closed for the first snow day in five years.

The good news for the Northeast was storm advisories were lifted. But parts of the region were still under wind-chill advisories Tuesday, which means winds and low temperatures could put exposed skin at risk for frostbite.

Wind-chill advisories were in effect for parts of New York and Pennsylvania until 10 a.m. ET.

On Monday, parts of New England received as much as 15 inches of snow as the late winter storm churned its way up the Eastern Seaboard.

Earlier, the storm had dumped up to 11 inches of snow in parts of the Carolinas.

Watch Washingtonians cope with the storm »

Watch the South deal with accidents »

The heaviest snow -- up to 15 inches -- hit near the heavily populated Interstate 95 corridor between Boston and Providence, Rhode Island, northeast Connecticut and north into the Merrimack Valley in northeast Massachusetts, the National Weather Service said.