(CNN) -- In anticipation of more flooding next week, residents of Fargo, North Dakota, began stacking sandbags Wednesday for the second time in just over two weeks along the banks of the Red River. 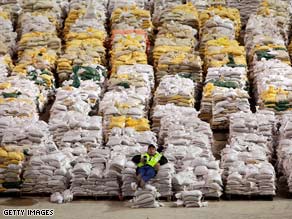 A trucker relaxes April 1 on sandbag pallets in Fargo, North Dakota, which is preparing for more flooding.

"If we get a million, that will be a total of 4 million we've made since the flood started," she said.

The first sandbag effort began about March 23. The Red River crested at nearly 41 feet at Fargo on March 28, breaking a record that had held since 1897, when the Red River reached 40.1 feet.

The National Weather Service issued a flood warning Tuesday, predicting that melting snow -- and possibly rain -- will start to raise river levels on the Red River south of Oslo, Minnesota, this week.

Lunday said forecasters expected the river to crest there between April 16-18, possibly reaching 35 feet on April 14.

"I don't think people are as worried as they were the last time, but the possibility of getting up to 40 feet is a concern," Lunday told CNN.

The Red River meanders along the border between North Dakota and Minnesota, so many other cities also were bracing for flooding.

All About National Weather Service • Fargo