(CNN) -- Numerous wildfires were roaring Thursday through parts of Oklahoma and Texas, engulfing one town and searing neighborhoods in others, including one in Oklahoma City. Hurricane-force winds continued to kick the flames even higher. 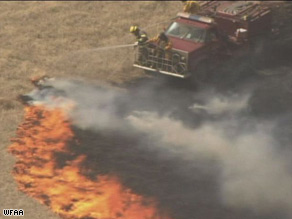 Firefighters in Bowie, Texas, try to get a grass fire under control. Bowie is about 70 miles northwest of Fort Worth.

The fires had engulfed so many miles of turf, and flying embers had sparked in so many different places, that hours after the first blazes were reported Thursday morning, safety officials still weren't sure how many fires they were facing.

In Texas, the 100-person town of Stoneburg was "burned over," by a 25,000-acre fire said Texas Forest Service spokeswoman Misty Wilburn.

The town, northwest of Dallas near the Oklahoma state line, had been evacuated, she said.

Seventy-five to 100 homes had been destroyed in Oklahoma, and 13 people were confirmed injured -- two of them critically, according to emergency officials.

Wilburn said Texas authorities were working at least nine major fires Thursday evening, seven in the west of the state and two in the north.

"Everything we have is committed to fires," she said. "Everyone is maxed out."

Feeding the flames were strong winds that were gusting as high as 76 mph, the strength of a Category 1 hurricane, and grounding many emergency aircraft that can't fly safely in those conditions.

On the southwest side of Oklahoma City, fires had engulfed eight homes, and were believed to be destroying many more.

In Choctaw, Oklahoma, dozens of homes had been destroyed, and the high school was on the verge of burning, police dispatcher Silva Schneider said just before 8 p.m. Aerial video footage of the central Oklahoma city of about 9,000 people showed row after row of houses in several different neighborhoods engulfed in flames.

The Oklahoma towns of Velma, Sparks, Wellston, Healdton and Midwest City, a suburb of Oklahoma City, had all been ordered into mandatory evacuations because of the fires, which officials say are finding plenty of easy fuel because of dry conditions throughout the Southwest.

"It's a bad day in Oklahoma," said Albert Ashwood, director of the state's emergency management department.

Grass fires were being reported west of the Dallas-Fort Worth area, with the smell of smoke already wafting through the cities.

A spokesman for the Texas Forest Service said fires in the state were burning in numerous counties in areas near Fort Worth, Wichita Falls and Amarillo.

He said there were so many blazes that firefighters were having to ignore some of them, and that winds were so high that most fire-fighting aircraft were unable to fly.

The National Weather Service had categorized much of Texas and Oklahoma an "extremely critical fire weather area" Thursday because of the dry conditions and winds. Large portions of western and central Texas and western Oklahoma are in a drought, according to the service.

A firefighter who was working near Lindsey, Oklahoma, was in critical condition with third-degree burns over 35 percent of his body, according to a hospital spokeswoman. A motorist in Oklahoma also was hospitalized after driving into an area with heavy smoke, authorities said. iReport.com: Are wildfires affecting you?

While the blazes seemed overwhelming in spots, firefighters were making some progress on some fronts.

In Breckenridge, Texas, a fire that started in an old landfill and burned several hundred acres had been contained just north of the city limits, according to fire officials.

But even as that blaze came under control, the fire department received reports of another fire.

Wilburn said that as nightfall approached, Texas had been able to get some firefighting aircraft in the air and that five of the fires were at least partially contained.

CNN's Hank Bishop and Aaron Cooper contributed to this report.

All About Wildfires • Oklahoma • Texas