(CNN) -- A Texas couple who were burned to death in the Texas wildfires Thursday had been packing their truck to evacuate their home but were unable to escape fast-moving flames, a relative told CNN Friday. 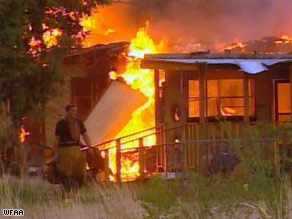 A house burns after wildfires raced through rural Montague County in Texas.

"I think they underestimated how fast it was moving," said Carol Quinn, the daughter-in-law of victim Matt Quinn. "I think this was very fast and very hot. ... It is an awful story."

Matt Quinn, 80, and his wife, Cathy, were two of the three confirmed fatalities in Thursday's fires. Matt Quinn was a former reporter for the Dallas-Fort Worth station WFAA-TV and had spent his life in journalism. The Quinns lived in rural Montague County.

The couple's son Chris, 30, was hospitalized in fair condition with second- and third-degree burns and was expected to recover, Carol Quinn said.

The family did not live in a mandatory evacuation area but faced gusty winds and a wall of flames 30 feet high, she said. She said they had called the sheriff's department shortly before their truck was engulfed.

Another person was killed just west of Dallas and Fort Worth in what's being called the Cement Mountain fire, the Texas Fire Service reported Friday afternoon.

Wildfires are also burning in Oklahoma. In Midwest City, one of the places hit hardest by the flames, fire officials said at least one of the fires appears to have been intentionally set -- although they stopped short of calling it arson.

See where the fires are burning »

"We'd like to make the distinction and understand that there's a difference between being intentional and having intent with malice," said city Fire Marshal Jerry Lojka. "So we haven't proved that there was malice, but we do know that the fire was intentionally set."

Winds that at times reached hurricane-force levels blew through towns and neighborhoods, fueling fires that burned some homes while sparing others.

Watch what is left of homes -- rubble »

More than 101,000 acres in Texas were burned, destroying 32 buildings, according to Bill Beebee of the Texas Forest Service.

About 140 structures in Oklahoma have been destroyed, most of them in south-central Oklahoma and Oklahoma County, according to the Department of Emergency Management. At least 49 people were injured.

Health officials said that with two exceptions, injuries from the fires were moderate or minor.

A motorist was severely injured after losing control of a vehicle on a smoky road. Also, a Lincoln County firefighter was in stable condition at the Integris Baptist Burn Center in Oklahoma City.

The fires burned all the way into Oklahoma City, and by Friday afternoon, firefighters were once again battling blazes that had flared up again within the city limits. iReport.com: Are wildfires affecting you?

"We are doing everything we can to deliver resources to firefighters and first responders on the front lines. They have done an amazing job under very challenging conditions, and we owe them a great debt of gratitude. Their heroism has helped save lives and property," Henry said in a written statement.

"Our thoughts and prayers are with the scores of families and individuals who lost homes or businesses," he said.

Midwest City and the nearby towns of Choctaw and Nicoma Park were especially hard hit. By late Friday afternoon, the fires were under control and firefighters were putting out hot spots, the governor said.

All About Wildfires • Oklahoma • Texas