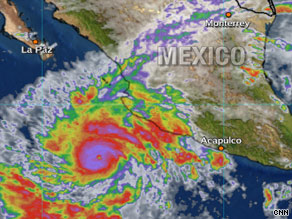 "There's a good chance this system could be a Category 5 in the next 24 hours," said Dave Roberts, a hurricane specialist with the National Hurricane Center in Miami, Florida.

Jimena is the 10th named storm of the Pacific season.

"It started out kind of slow for the Pacific," said Robbie Berg, another specialist at the hurricane center. "Now we've had seven named storms form, and that's pretty busy for August. I think it's been a couple decades since we've seen that many storms in August."

There's no reason for people in Southern California to panic, but they should keep an eye on Jimena, Berg said.

"There's no watches or warnings in effect, but we would like residents and tourists in the area to monitor the progress of the storm," Berg said. "We do expect it to maintain its major hurricane strength as it heads up into that area."

Tropical Storm Kevin has also emerged in the middle of the Pacific Ocean. However, Berg said it is weak -- with winds at a mere 50 mph -- and is not expected to pose a serious threat.

All About Hurricanes and Cyclones • Baja California • National Hurricane Center