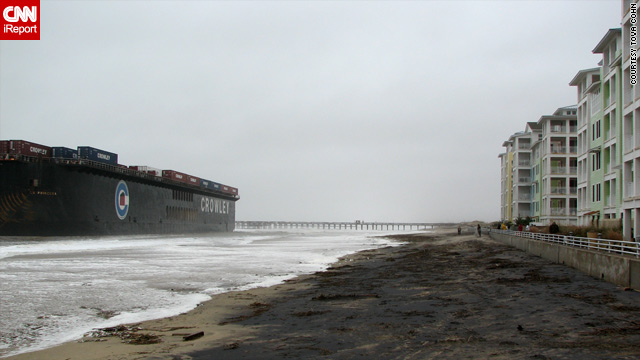 An iReporter in Sandbridge Beach, Virginia, captured this image Friday of a huge freighter in the shallows close to the shore.
STORY HIGHLIGHTS

Strong winds and rain from the powerful storm have left thousands without power.

Ida lost momentum but not the ability to generate winds and rain as it made landfall on the U.S. Gulf Coast earlier this week, forecasters said.

The National Weather Service had flood advisories in effect Friday for areas of coastal Pennsylvania, Delaware and New Jersey.

At least 160 National Guard troops were deployed in sections of Virginia, Delaware and New Jersey to evacuate residents in high-water areas as well as provide cots, sandbags and potable water, according to the Pentagon's National Guard Bureau.

"About 40 members of the Delaware National Guard have provided support to civilian emergency relief agencies in Kent and Sussex counties," the bureau said.

The New Jersey National Guard sent 18 guardsmen with trucks to help with evacuations in the Cape May and Atlantic counties, where the governor Thursday declared a state of emergency due to flooding, Guard officials reported

Virginia Gov. Tim Kaine declared a state of emergency, saying the remnants of Ida had combined with another storm to cause dangerous conditions in some areas. By early afternoon, at least 155,000 customers were without power in the state -- mostly in and around Norfolk, according to the Dominion Power Web site.

"With the National Weather Service indicating that eastern Virginia could experience flooding and storm surge comparable to the effects of a Category 1 hurricane, it's critical that Virginians make the necessary preparations," Kaine said. "While we will continue to monitor conditions, the commonwealth is preparing for a period of coastal flooding through at least Friday evening."