(CNN) -- Gunmen shot and killed a food monitor for the United Nations' World Food Program on Thursday, the second killing of a WFP humanitarian worker in Somalia in three days, a spokesman for the agency said Thursday. 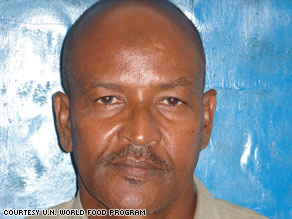 Mohamud Omar Moallim, a food monitor for the United Nations, was killed in Somalia on Thursday, the U.N. says.

Moallim joined WFP in 1993 and worked until 1995 as a logistics assistant. He rejoined the agency in May 2006 as a food monitor. He was abducted in September 2008 for 16 hours outside Mogadishu. He leaves two wives and 11 children.

Colleagues said Moallim was calm, extremely hard-working and highly responsible and was often consulted for advice and support by other staff members.

On Tuesday, three masked men shot and killed 44-year-old Somali national Ibrahim Hussein Duale while he was monitoring food distribution at a school in Yubsan village, near the Gedo regional capital of Garbahare, the WFP said.

Witnesses say the gunmen approached Duale while he was seated, ordered him to stand up and then shot him, according to the account on the WFP Web site.

Duale leaves a wife and five children. He joined WFP in 2006 as a food monitor in the Gedo region, which borders Kenya and Ethiopia.

All About Somalia • United Nations