Cholera deaths near 2,000 in Zimbabwe

HARARE, Zimbabwe (CNN) -- Deaths in Zimbabwe related to the cholera epidemic are approaching 2,000, the World Health Organization said Tuesday, and close to 40,000 people have been affected by the preventable water-borne disease. 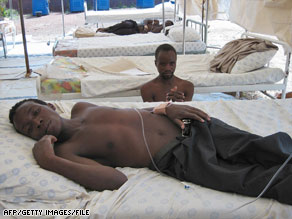 Two men rest in a cholera rehydration tent on the South Africa-Zimbabwe border in December.

Statistics released by the Geneva, Switzerland-based organization WHO on Tuesday show 1,937 people have died in the raging epidemic from the 38,334 who contracted the disease since its outbreak in August.

Cholera has spread to neighboring countries South Africa and Botswana.

The epidemic comes at a time when President Robert Mugabe's government is facing its worst economic crisis, manifested in shortages of all essentials from food, fuel, cash, foreign currency and electricity and a hyperinflationary economy.

Health experts have said Harare's failure to import adequate stocks of water-treating chemicals is the main driver of the disease. Most residents have resorted to rivers and shallow wells for drinking water, because taps are usually dry.

On top of that problem, the waste-disposing system has collapsed. Children can be seen playing on heaps of uncollected garbage in the suburbs of most urban areas in Zimbabwe.

Last month, Mugabe's government declared the cholera epidemic a national emergency. Since then, international governments and organizations such as WHO, Doctors Without Borders, Oxfam, USAID and other U.N. groups have moved in to combat the disease that has engulfed all of Zimbabwe's provinces.

But the situation has not immediately improved.

Zimbabwean Health Minister David Parirenyatwa warned this month that the epidemic could get worse as the rainy season develops.

Harare issued a warning Monday that some parts of the country are going to experience floods during rainy season, further compounding the fight against the disease.

The season peaks in January or February and ends in late March.

Mugabe and rival Morgan Tsvangirai signed a power-sharing deal in September to run the government after a hotly contested presidential election. It was widely hoped that the deal would be the panacea to the humanitarian and economic problems bewildering the once-prosperous Zimbabwe, but the pact is yet to take effect.

The sides continue to debate the sharing of key Cabinet ministries such as information, local government, finance, defense and home affairs.

All About Zimbabwe • Robert Mugabe • Cholera