(CNN) -- Piracy off the coast of Somalia rose nearly 200 percent in 2008 compared to the year before, with bolder attacks over greater distances, an international piracy monitor said Friday. 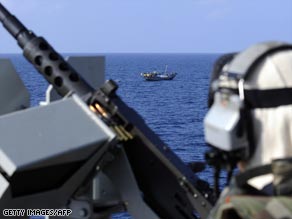 The French military on patrol in the Gulf of Aden.

Somalia and the Gulf of Aden were the worst areas for piracy in 2008, according to the annual report from International Maritime Bureau's Piracy Reporting Center (PRC).

It said 42 vessels were hijacked there and 815 crew members taken hostage -- more than any place else in the world.

The increased ability of pirates to sail farther out to sea, coupled with the inability of the Somali government to respond, led to what the report called an "unprecedented" rise in piracy in the area.

The problems off the Somali coast contributed to a global rise in piracy, which was up 11 percent in 2008 from the year before, the report said.

"The 2008 statistics surpass all figures recorded by the PRC since it began its worldwide reporting function in 1991," said IMB Director Captain Pottengal Mukundan.

Worldwide in 2008, a total of 49 vessels were hijacked and 889 crew members taken hostage, the report said. Eleven crew members were killed and 21 others are missing and presumed dead.

The pirates are targeting every kind of vessel and are better armed and prepared to assault and injure the crew, the report said. Incidents involving guns nearly doubled from 72 in 2007 to 139 last year.

Pirate attacks last year included the hijacking of the largest ship ever taken by pirates, an oil supertanker called the Sirius Star.

Attackers seized the giant ship and its 23-man crew in November and only released it last week after receiving a $3.5 million ransom payment. The carrier's crew was released unharmed.

Last year's uptick in hijackings off East Africa has already spurred a number of international navies to patrol the Gulf of Aden.

Mukundan said he hoped that more governments would authorize their naval forces to patrol the region.

"International navies are the only ones capable of effective response against piracy in the region and can help to secure the safety and security of this major maritime trade route," Mukundan said.

The main difference between the East and West African pirate activities is that almost all the incidents in Nigeria are conducted within its territorial waters, whereas most of the incidents along the East coast of Africa and the Gulf of Aden occur on the high seas, the report said.

That means vessels in the Gulf area have a much harder time staying away from pirate-infested waters.

The motives for the attacks are also different. In Somalia the motives are financial while in Nigeria they are at least partly political, the report said.

Under-reporting of piracy in Nigerian waters is also a problem for the International Maritime Bureau, the report said.

While 2008 appeared to be a bad year for piracy, the report noted declines in other areas of the world, especially in Indonesia.

Mukundan said sustained anti-piracy efforts by Indonesian authorities have resulted in declines every year. More than 121 attacks were reported there in 2003 but only 28 were reported last year, most of which were opportunistic, low-level attacks, Mukundan said.

Only two attacks happened last year in the Malacca Straits, which lie between Indonesia and Malaysia, compared to seven the year before, the report said.

Farther south, the Singapore Straits saw a slight rise in incidents, going from three to six, the report said.

"This welcome reduction has been the cumulative result of increased vigilance and patrolling by the littoral states and the continued precautionary measures on board ships," the report said.

"With the world economy in its present uncertain condition, there is a possibility of piracy increasing. Navies and coast guards must continue therefore to maintain their efforts against pirates."