(CNN) -- Rwandan troops have crossed into the Democratic Republic of Congo to prepare for a joint operation with Congolese forces against a Hutu militia, the United Nations said. 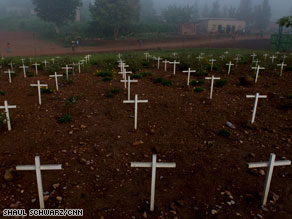 "We can tell you there are Rwandan soldiers here, but I cannot confirm the numbers," said Madnodje Mounoubai, spokesman for the U.N. mission in the Democratic Republic of Congo.

The Rwandans will team up "with the Congolese forces," he said Wednesday. "The Rwandan forces are in a meeting with Congolese forces and the understanding is that in the meeting they are preparing a joint operation against the FDLR," or the Democratic Liberation Forces of Rwanda.

The Rwanda News Agency reported that Rwanda has dispatched 1,917 soldiers.

Rwanda and Congo traditionally have been on different sides of the conflict in eastern Congo.

The conflict is effectively an extension of the Rwandan genocide dating back to the early 1990s, when hundreds of thousands of Rwandans were killed in ethnic battles between minority Tutsi and majority Hutu.

According to a statement issued last week by the Rwandan government, the joint military operation is aimed at driving out the FDLR and former members of the Interhamwe militia, "remnants of those who spearheaded the 1994 genocide against Tutsis."

Michael Arunga, a Kenya-based spokesman for the World Vision aid organization, said his colleagues in Goma -- a city in eastern Congo -- told him that Rwandan troops arrived Tuesday morning in the village of Ishsha, outside of Goma.

Arunga said he had no knowledge of Rwandan troops being in Congo before.

A U.N. statement said the FDLR has been involved in clashes since late August mainly in North Kivu, "where the national army, the mainly Tutsi militia -- known as the CNDP -- and other rebel groups ... have fought in shifting alliances, uprooting around 250,000 civilians on top of the 800,000 already displaced by violence in recent years."

A report by a U.N. Security Council panel last month said Rwanda and Congo were fighting a brutal proxy war for territory and precious natural resources in eastern Congo, and all parties involved in the conflict were using execution, rape and child soldiers as tools of war.

The report, filed by a panel of U.N. experts, "found evidence that Rwandan authorities have sent officers and units of the Rwanda Defense Forces" into Congo in support of Congo rebel leader Laurent Nkunda's fighters.

All About Laurent Nkunda • Democratic Republic of the Congo • Rwanda