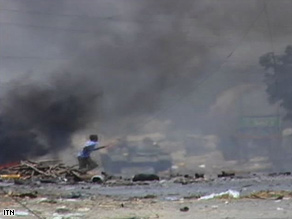 Gunfighting has plagued the streets of Somalia's capital in recent months, stalling efforts to restore order.

The car was heading toward headquarters of the African Union Mission in Somalia in late morning when a bomb went off before it reached the building, which is guarded by police, Abdi Gobdon said.

The attack also threatened a group of nearby African Union peacekeepers.

African Union Commission Chairman Jean Ping condemned the "cowardly and terrorist" suicide attack in Mogadishu, which he said comes during a time of "renewed efforts to further peace and reconciliation" to the troubled nation.

Somalia has been wracked by violence and lawlessness since the government was overthrown in 1991. A drought and high food and fuel prices also have increased the need for humanitarian assistance. iReport.com: Are you there? Share your story

On Saturday, various officials met in Djibouti with the aim of expanding the Somalian parliament and electing a president for the Transitional Federal Government, Ping said.

The United Nations Security Council adopted a resolution January 16 expressing its intent to send U.N. peacekeeping forces back to the unstable nation, and the AU plans to send additional troops to Somalia in coming weeks, Ping said.

The United Nations' World Food Programme considered suspending delivery of food to Somalia after the killings of two aid workers in early January but then decided that would hurt the very people the program is trying to help.