(CNN) -- The new International Criminal Court launched its first trial Monday at The Hague in the Netherlands -- the prosecution of a former militia leader charged with using child soldiers in the Democratic Republic of Congo's brutal civil war. 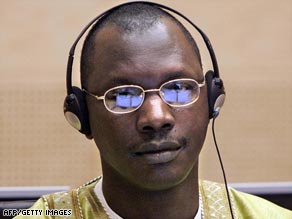 Thomas Lubanga at the International Court of Justice in The Hague in 2007.

Thomas Lubanga Dyilo is accused of forcing children under the age of 15 to fight in the military wing of the Union of Congolese Patriots.

"Lubanga's armed group recruited, trained and used hundreds of young children to kill, pillage and rape. The children still suffer the consequences of Lubanga's crimes. They cannot forget what they saw, what they suffered, what they did," ICC chief prosecutor Luis Moreno-Ocampo said as the trial opened on Monday morning.

Lubanga pleaded not guilty. His defense will not begin its opening statement until Tuesday. He sat largely impassively, in suit and tie, as the prosecution opened its case.

The prosecution claims to have video of Lubanga in training camps with what appear to be child soldiers, and will call former child soldiers as witnesses to testify against him.

Nineteen of the 34 witnesses will testify anonymously, with their faces hidden and their voices distorted, the court said.

Lubanga used children to "participate actively in hostilities in (the eastern) Ituri (region of the DR Congo), from September 2002 to August 2003," the prosecution alleges.

"This first ICC trial makes it clear that the use of children in armed combat is a war crime that can and will be prosecuted at the international level," said Param-Preet Singh, counsel in Human Rights Watch's International Justice Program.

The group urged the ICC to bring to trial Bosco Ntaganda, another UCP leader who has been charged but remains at large. It also called for the court to consider charging political leaders from Congo, Rwanda and Uganda.

"The ICC must go beyond local war lords like Lubanga," said Singh. "We look to the prosecutor to investigate those who supported Lubanga and other militias operating in Ituri, including senior officials in Kinshasa, Kigali, and Kampala."

Lubanga was arrested and surrendered to the ICC in March 2006.

The trial, the first since the ICC launched, was delayed for months as prosecutors and defense battled over access to evidence.

The prosecution phase of the trial is expected to last for months. It is not clear how long the defense will take, since it has not said.

The International Criminal Court, which was launched in 2002, was formed to try "persons accused of the most serious crimes of international concern," namely genocide, crimes against humanity and war crimes. It is based on a treaty signed by 108 countries.

The United States does not recognize the court for fear U.S. citizens could be brought before it. Washington signed the treaty in 2000, under then-President Bill Clinton, but Congress never ratified it, so the U.S. is not a participant.

Former President George W. Bush's administration announced in 2002 it would neither support nor obstruct the ICC, which Undersecretary of State for Political Affairs Marc Grossman said was "an institution of unchecked power."

The Lubanga trial comes as the chief prosecutor of the International Criminal Court recently said his office is paying serious attention to reports of war crimes in the country.

Moreno-Ocampo said his office has jurisdiction to investigate and prosecute war crimes in Congo. Along with the Democratic Republic of Congo, the court is investigating war crimes in Uganda, the Central African Republic and the Sudanese region of Darfur.