(CNN) -- Radical Islamist fighters seized control of the seat of Somalia's U.N.-backed transitional government Monday, raiding the parliament building and demanding that several lawmakers publicly surrender, according to a journalist who witnessed the spectacle. 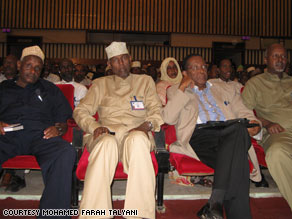 Members of the Somali Transitional Federal Parliament are meeting in the neighboring country of Djibouti.

Al-Shabab fighters took over the parliament building and the presidential palace in Baidoa, in the southwestern part of the country, a day after the Ethiopian troops who had backed up the transitional government left the country.

The insurgents captured five members of parliament and paraded them through the city streets, with hundreds of residents looking on, the reporter said. The five were released after publicly surrendering.

The situation left Somali lawmakers stranded in the neighboring country of Djibouti, where they often convene and where talks on forming a new government are under way.

"We have nowhere to return to," Parliament Speaker Aden Mohamed Nur told fellow lawmakers there.

Somalia's U.N.-backed transitional government took office after Ethiopian troops invaded the country at its request in December 2006. The Ethiopian invasion ousted the Islamic Courts Union, an Islamist movement that had claimed control of the capital Mogadishu earlier that year.

Ethiopia's invasion had the blessing of the United States, which accused the Islamic Courts Union of harboring fugitives from al Qaeda. But various Islamist groups -- including the hard-line Al-Shabab, which the United States has designated a terror organization -- rejected the presence of Ethiopian forces and mounted an insurgent campaign against the Ethiopians and the transitional government.

Ethiopia announced on Sunday that all its forces have left Somalia. Last week, as Ethiopian troops began pulling out of the Somali capital, forces from different Islamist groups -- including Al-Shabab -- took control of bases the Ethiopians abandoned around Mogadishu.

The transitional government maintained very little control outside of Baidoa, even with the support of the Ethiopian forces. It has also been wracked by an internal power struggle between Prime Minister Nur Hassan Hussein and President Abdullahi Yusuf Ahmed, who resigned in December.

In Washington, the State Department said U.S. officials are working to independently confirm the reports from Baidoa. But State Department spokesman Gordon Duguid said members of one of the major Islamic factions, which signed a peace agreement in October in Djibouti, are already joining the transitional government.

Duguid said the Alliance for the Re-liberation of Somalia, another offshoot of the ICU, will choose up to 200 new members of the transitional parliament. Another 75 members will be drawn from other opposition groups, and the expanded parliament is expected to elect a new president soon.

"We remain deeply concerned about the ongoing violence in southern Somalia, which continues to claim innocent lives," Duguid said. "Lasting peace and stability in Somalia can only be established through the reconciliation process underway through the Djibouti Agreement and rejection of extremism."

With Monday's takeover of Baidoa, the transitional government only has control of the presidential palace in the Somali capital of Mogadishu and the road to the airport in the capital city, which it holds with the help of African Union forces.