MOGADISHU, Somalia (CNN) -- At least 39 civilians were killed in Somalia's capital Monday after a convoy of African Union peacekeepers was hit by a roadside bomb, causing the troops to open fire, officials and eyewitnesses said. 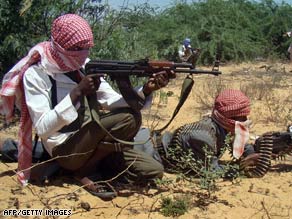 Maj. Ba-Huko Barigye, spokesman to the African Union Mission to Somalia (AMISON), said an explosion targeted a contingent of Ugandan troops. At least one soldier was injured and one of the vehicles damaged, Barigye said.

"The deputy mayor has got the wrong information," he said. "They are targeting AMISOM, but the people who have died are all Somali civilians, who have nothing, whatsoever to do with AMISOM."

Officials say the incident happened on Maka al-Mukarama road, which connects the presidential palace and the airport in southern Mogadishu. The incident occurred on the same day that the new Somali president, Sheik Sharif Sheik Ahmed, was attending an African Union summit in the Ethiopian capital Addis Ababa.

Ethiopia invaded Somalia in 2006, to depose an Islamic government led by Ahmed that had taken control of Mogadishu. But at the summit, U.N. Secretary-General Ban Ki-moon urged continued support for national reconciliation efforts in Somalia, which has been without an effective central government since 1991.

"It is important that these efforts should have a tangible effect in improving the security environment for the Somali people and humanitarian actors," Ban said in a statement released by his office. "The United Nations will provide strong logistical support to the African Union's AMISOM force and help develop Somali security forces."

He also encouraged AU leaders to consider a plan that will incorporate AMISOM into a larger U.N. peacekeeping force in the months ahead.

AMISOM was set up to take over from Ethiopian forces, which were supposed to be withdrawn soon after the December 2006 invasion that deposed the Islamic Courts Union, which Ahmed once led. But the Ethiopians and the country's U.N.-backed transitional government were soon battling Islamist guerrillas, including the militia al-Shabaab -- which the United States has designated as a terrorist group with links to al Qaeda.

The transitional government eventually signed a peace agreement with a new movement led by Ahmed, the Alliance for the Re-Liberation of Somalia. But al-Shabaab has rejected the deal and continued fighting.

The militia overran the town of Baidoa, the seat of the transitional government, within hours of the withdrawal of Ethiopian troops last week. Ahmed was elected president Saturday by lawmakers in Djibouti, and many Somalis view him as a final hope to challenge the militia and its extremist ideology.

CNN's Amir Ahmed and Ahmednor Mohamed Farah for CNN contributed to this report.

All About Somalia • Mogadishu • War and Conflict