(CNN) -- The African Union responded angrily and defiantly to the killing of at least 11 Burundian soldiers in an apparent suicide bomb attack Sunday in Somalia's capital, Mogadishu. 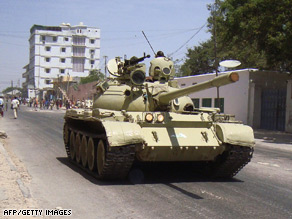 Ugandan tanks from the African Union Mission to Somalia patrol the streets of Mogadishu this month.

The 11 soldiers were on a peacekeeping mission for the African Union. The attack also seriously injured 15 people.

A spokesman for al-Shabab, a radical Islamist militia with ties to al Qaeda, claimed responsibility for the attack, saying at a news conference that it had been carried out by two "martyrs."

The attackers "have no care for Somalia, and their sole aim is to destroy and bring about more violence to the country," El-Ghassim Wane, an African Union spokesman, said from the organization's headquarters in Addis Ababa, Ethiopia.

"In any event, it won't affect our determination to do whatever we can to support Somalia," the African Union said in a statement.

There is a 3,400-strong African Union peacekeeping force in Somalia, made up entirely of Burundian and Ugandan troops. The AU awaits additional soldiers from member countries, with the force expected to reach about 8,000 soldiers.

The attack was the deadliest yet for peacekeeping soldiers in the battle-torn city of Mogadishu.

In early February, mortars were fired at the presidential palace hours after newly elected Somalian President Sheikh Sharif Sheekh Ahmed arrived in the country's capital. Ahmed was voted in by parliament.

Somalia's U.N.-backed transitional government is still coming together. On Sunday evening, the newly formed Cabinet met for the first time, in Djibouti, according to the Shabelle Media Network.

Militias have controlled most of Somalia for nearly two decades.

Ethiopian troops invaded the country at its request in December 2006. The Ethiopian invasion ousted the Islamic Courts Union, an Islamic movement that had claimed control of Mogadishu earlier that year.

Ethiopia's invasion had the blessing of the United States, which accused the Islamic Courts Union of harboring fugitives from al Qaeda. But various Islamist groups -- including al-Shabab, which the United States has designated a terror organization -- rejected the presence of Ethiopian forces and mounted an insurgent campaign against the Ethiopians and the transitional government.