HARARE, Zimbabwe (CNN) -- Zimbabwe's High Court on Tuesday upheld the release of a top opposition politician on bail, but the state attorney vowed to take the case all the way to the Supreme Court. 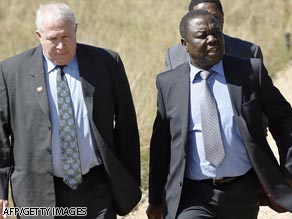 Roy Bennett is the opposition's choice to be deputy agriculture minister in a new power-sharing government. He was arrested last month on allegations of possessing weapons for sabotage, banditry and terrorism. He was initially charged with treason.

Judge Tedious Karwi rejected the state attorney's appeal of his ruling last week in which he said Bennett should be released on $2,000 bail "in the interest of justice."

Bennett's attorney, Beatrice Mtetwa, said Tuesday she was doubtful her client would be released.

"They [the state] were not granted the leave to appeal," she told reporters as she left court on Tuesday. "Legally, Roy must be released, but I will not be surprised that he will not be released."

State lawyer Chris Mutangadura said that he plans to appeal to the Supreme Court on Wednesday to have Bennett remain in police custody.

"Nothing can stop us from appealing [to the Supreme Court]," he said. "We are [appealing] as a matter of urgency."

Charges for the 52-year-old white farmer -- an ardent critic of President Robert Mugabe's policies -- stem from a cache of weapons found in the possession of Peter Hitchmann, who reportedly implicated Bennett, saying the arms were meant to destabilize the country.

Morgan Tsvangirai, the leader of the opposition Movement for Democratic Change (MDC) and the country's new prime minister, had written a letter to the High Court as a guarantee that Bennett would not flee the country until the matter has been finalized.

On Monday, Zimbabwe's top human rights activist, Jestina Mukoko, was released on $600 bail. Kidnappers who it was later revealed were state agents abducted her on December 3 from her home outside Zimbabwe's capital, Harare.