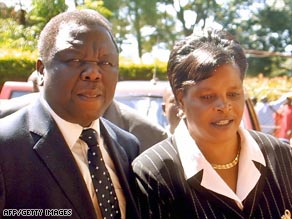 Tsvangirai and his wife, Susan, were en route to the prime minister's hometown of Buhera.

The crash, on a busy two-lane highway between Tsvangirai's hometown of Buhera and the capital city of Harare, comes just weeks after the start of a power-sharing agreement between Tsvangirai and his political rival, President Robert Mugabe.

Analysts say the crash is bound to raise suspicion of foul play, with one former U.S. diplomat calling for an outside investigation, saying it is not the first time that a political foe of Mugabe has been killed or injured in a car crash.

Members of Tsvangirai's political party, the Movement for Democratic Change, said Friday that it was too early to tell whether the crash is anything other than an accident.

Tsvangirai's aide and driver also were injured in the head-on collision with a large truck, according to his spokesman, James Maridadi.

Movement for Democratic Change spokesman Nelson Chamisa said he spoke to Tsvangirai at the hospital, and the party leader was in "relatively stable" condition.

Sources at The Avenues Clinic in Harare said that Tsvangirai was in stable condition with minor head injuries and that the prime minister was alert and talking. One source said the attending doctor had told him of his wife's death.

Another said that doctors were planning to keep Tsvangirai overnight for observation and that specialists were checking his condition.

Tsvangirai's MDC reached the power-sharing agreement with Mugabe in September after months of angry dispute that included violence. More than 200 deaths, mainly those of opposition supporters, were reported leading up to and in the aftermath of the election.

"I'm skeptical about any motor vehicle accident in Zimbabwe involving an opposition figure," said Tom McDonald, the U.S. ambassador to Zimbabwe from 1997 to 2001. "President Mugabe has a history of strange car accidents when someone lo and behold dies -- it's sort of his M.O. of how they get rid of people they don't like."

All three died in car crashes.

"This is several," McDonald said. "So, when I hear that Tsvangirai was in an accident, it gives me pause."

McDonald, now an attorney with the Washington law firm Baker Hostetler, urged a full investigation by outside authorities.

One analyst who studies the region said the collision could "exacerbate" the fragile unity government.

"There will undoubtedly be suspicions about the cause of the crash and whether there was foul play involved," said Jennifer Cooke, director of the Africa Program at the Center for Strategic and International Studies in Washington.

"At a time when there needs to be confidence-building measures, this incident potentially raises suspicions and undermines the potential for greater cohesion of the government. [There is] huge potential for the agreement to be manipulated by Mugabe."

McDonald, however, was quick to say that traffic accidents are common in Zimbabwe. The highway on which Tsvangirai was traveling is a two-lane road where tractor-trailers are common, vehicles in the country are often in bad shape and drivers often are inexperienced, he said.

The collision occurred on the Harare-Masvingo Road as Tsvangirai and his wife headed to his hometown of Buhera, south of the capital, Harare, his spokesman said.

The couple, who were married in 1978, have six children, according to the British Broadcasting Corporation.

Last month, Susan Tsvangirai told a BBC affiliate that the past decade had been an "endurance test" for her husband and his MDC colleagues.

"People went through hell, but they stuck to their ideals to seek change through democratic means," she said. "This was a struggle that we endured with MDC cadres, activists, supporters and peace-loving Zimbabweans.

"To them I say thank you so much for the support they gave the MDC to reach this momentous period."

A former miner and union organizer, Morgan Tsvangirai first ran for president in 2002 against Mugabe, who has been the country's leader since it gained independence from Great Britain in 1980.

Since then, Tsvangirai has been charged with treason twice and accused of plotting to assassinate Mugabe. Tsvangirai was arrested and allegedly beaten in 2007. The criminal charges against him were dropped.