HARARE, Zimbabwe (CNN) -- Zimbabwean Prime Minister Morgan Tsvangirai will return to the country for his wife's funeral on Wednesday, a spokesman for his Movement for Democratic Change party says. 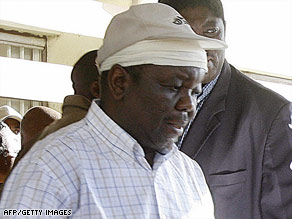 Tsvangirai was injured Friday in a car wreck that killed his his wife of 31 years, Susan. His party is conducting its own investigation into the crash, a senior official said.

He called it "a send-off rally befitting a heroine."

He refused to say exactly when Tsvangirai would return to Zimbabwe. "The president (of the MDC) will definitely be back in the country in time for the burial set for Wednesday and the other formalities that go with the funeral. But I cannot give the media his itinerary as that comprises his security," Chamisa said.

A Botswanan government source and a source with the prime minister's party said earlier Tsvangirai was at a hospital in Gaborone, Botswana.

"He's badly bruised and is receiving treatment," the Botswanan government source said. Earlier Saturday, Tsvangirai left a hospital in Zimbabwe where he had been treated for head injuries from the wreck.

Video showed the prime minister walking out of the hospital with a baseball cap over his bandaged head.

A truck collided Friday with Tsvangirai's vehicle on a a busy two-lane highway between his hometown of Buhera, Zimbabwe, and the capital city of Harare.

MDC members told CNN that Tsvangirai believed the driver deliberately drove toward him.

The prime minister told one MDC official that "the truck came straight for him."

On Saturday MDC Secretary-General Tendai Biti said, "We cannot precipitate the investigations that are taking place."

But Biti said the MDC would augment the police investigation with its own probe.

He said Susan Tsvangirai "was a mother to all of us. She was a pillar and foundation to our prime minister."

Analysts say the crash is bound to raise suspicion of foul play. One former U.S. diplomat, noting it is not the first time a political foe of Mugabe's had been killed or injured in a car crash, called for an outside investigation.

"I'm skeptical about any motor vehicle accident in Zimbabwe involving an opposition figure," said Tom McDonald, who served as the U.S. ambassador to Zimbabwe from 1997-2001.

McDonald, however, was quick to say that traffic accidents were common in Zimbabwe.