(CNN) -- Madagascar's president, Marc Ravalomanana, is still in power despite "rumors" from political opponents that he has been removed, the besieged government said Saturday. 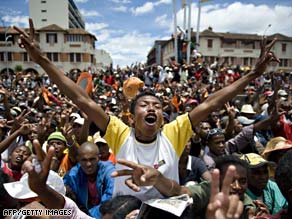 Protesters rally in Antananarivo last month before violence broke out near the presidential palace.

Political turmoil has engulfed the poverty-stricken island nation off the southeast coast of Africa, after news reports that the opposition picked a new prime minister to form a new government.

It's the latest in the power struggle between the government and opposition leader Andry Rajoelina, who recently was ousted from his position as mayor of the capital, Antananarivo.

Poverty has been a key issue in Madagascar, boosting Rajoelina's appeal to that segment of the population angered by the behavior of the president, such as his recent purchase of an expensive private jet.

In a statement issued Saturday, the government said -- rumors to the contrary -- the president "has not been removed" and remains at the presidential palace. But it did acknowledge that some members of the opposition "have entered and 'taken' the prime minister's office today."

The government said the opposition wants the president to stand down, but argues that such a pronouncement has no legal authority.

"This is, and remains until now, a street protest, using fear and repression to survive. A self-proclamation does not give any legal power."

According to news reports from the island, members of the military escorted opposition members into the prime minister's office, where the opposition issued a resolution detailing its plans.

The government said: "It is unclear whether the entire army is behind the opposition."

Because of the instability, the U.S. Embassy said it had "authorized the departure of non-emergency personnel and family members of embassy employees."

There is concern across the island and across the world that only the government's side is being disseminated in the nation's media.

Journalism watchdog group Reporters Without Borders on Friday issued a statement detailing the halt in publication of five newspapers and the harassment of journalists there.

"Independent journalists conscientiously doing their job of informing their fellow citizens on the current political situation are neither demonstrators nor active participants in this crisis. In this very tense political climate, it is essential they are protected," said Madagascar Secretary-General Jean-Francois Julliard.

Rajoelina and his supporters took to the streets at the beginning of February, declaring him the nation's leader after weeks of violence and looting that killed scores of people.

Rajoelina urged supporters to demand the resignation of Ravalomanana and said he planned to take charge until a transition government can be established in the country off Africa's southeastern coast.

U.N. Secretary-General Ban Ki-moon urged the leaders of Madagascar to resolve their differences.

There is also anger over reports that Ravalomanana recently bought a $60 million airplane in poverty-stricken Madagascar, where the World Bank estimates the average annual income at $320.