(CNN) -- Madagascar's president has ceded power to his military and the country's opposition leader is expected to declare himself president of the African nation, U.S. diplomats reported Tuesday. 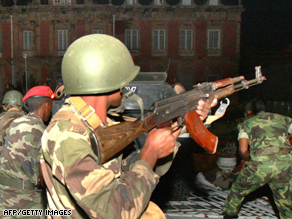 The move follows weeks of turmoil and sometimes-violent clashes on the island, located off the southeastern coast of Africa.

Over the weekend, besieged President Marc Ravalomanana insisted he would remain in power. But Ravalomanana submitted his resignation to the chief of his armed forces Tuesday, citing constitutional provisions, the U.S. State Department said.

Ravalomanana has been confined to his official residence by troops loyal to the opposition, but there was no indication he was in any danger, State Department spokesman Gordon Duguid said.

News reports from the island say opposition members were escorted into the prime minister's office by the military and issued a resolution detailing their plans. However, Madagascar's government said it was "unclear whether the entire army is behind the opposition."

At the United Nations, Secretary-General Ban Ki-moon was "gravely concerned" by the situation and urged the standoff be settled by peaceful means, his office said.

"This peaceful path can only be the result of transitional arrangements arrived at by consensus and enjoying wide support," the secretary-general's office said.

"The secretary-general calls on all concerned, particularly the police and the army, to ensure the security of the population and work together toward a non-violent resolution of the crisis."

Though some reports indicated Ravalomanana had sought refuge at the U.S. Embassy in the island's capital, Antananarivo, Duguid said he had "made no such request."

Ravalomanana was first elected in 2001 and won a second term in 2006. His government acknowledged over the weekend that opposition supporters had seized control of the prime minister's office.

Opposition forces are demanding that Ravalomanana leave the country, and opposition leader Andry Rajoelina was on his way to the presidential palace to proclaim himself president, according to a report from the U.S. Embassy.

But the island's government said the opposition has no legal authority to claim power from Ravalomanana.

"This is, and remains until now, a street protest, using fear and repression to survive. A self-proclamation does not give any legal power," a government statement said.

Rajoelina, the former mayor of Antananarivo, has been making a populist appeal to the country's impoverished masses. The dispute has been stoked by Ravalomanana's recent purchase of an expensive private jet and complaints that he has tried to undermine democracy.

Demonstrations picked up steam after February, when a violent protest outside the presidential palace left 23 people dead and dozens wounded. Clashes have spread to most provincial capitals and other cities around the country, with homes and businesses looted and burned, the State Department reported.

Because of the instability, the U.S. Embassy says it "has authorized departure of non-emergency personnel and family members of embassy employees," according to an embassy warden's message.

The Peace Corps also decided to "temporarily suspend" its program on the island and "send volunteers based there to South Africa."

Madagascar is a former French colony that is a similar size to France. It is the world's fourth largest island and home to five percent of its plant and animal species, 80% of which are endemic to Madagascar.