WASHINGTON (CNN) -- The U.S. State Department threw aside diplomatic language Tuesday, attacking Sudanese President Omar al-Bashir for creating what it calls a "catastrophe" by throwing many international aid workers out of the country. 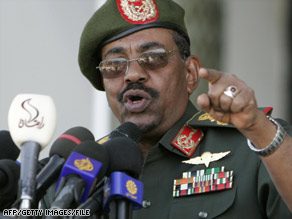 President Omar al-Bashir ordered the expulsion of aid groups after he was indicted on war crimes charges.

Secretary of State Hillary Clinton issued a direct challenge to Sudanese President Omar al-Bashir Tuesday, warning that he and his government "will be held responsible for every single death that occurs in" the refugee camps of the Darfur region.

Al-Bashir ordered the expulsion of 13 international aid groups from the Sudan earlier this month after he was indicted by the International Criminal Court on charges of war crimes. While other aid groups remain in Sudan, the United Nations said the 13 expelled groups provided roughly half the assistance delivered in Darfur.

Nearly 300,000 people have died in the Darfur conflict, and millions are homeless, according to the U.N.

Calling the situation in Darfur "horrendous," Clinton said President Obama's administration will appoint a special envoy for Sudan "in the coming days."

"Sudan is a priority for this administration, particularly at a time when it cries out for peace and for justice. The worsening humanitarian crisis there makes our task all the more urgent," President Barack Obama said in the statement. "General Gration's personal and professional background, and his service to the country as both a military leader and a humanitarian, give him the insights and experience necessary for this assignment."

Gration, a former fighter pilot, served as assistant deputy undersecretary of the Air Force for international affairs. Fluent in Swahili, he was raised partly in Africa, where his parents were missionary teachers

Clinton said the real question now is what kind of pressure can be brought to bear on al-Bashir and the government in Khartoum to make them understand "that they will be held responsible for every single death that occurs in those camps."

State Department spokesman Robert Wood told reporters, "It's just a catastrophe that Bashir has created. We're going to continue to make this case and we're imploring others to make this case that he needs to reverse that decision he took. Thousands, hundreds of thousands of people, could possibly be at risk and it's irresponsible, the action he took, and he needs to reverse it and reverse it immediately. People's lives are at risk."

Clinton said countries that support al-Bashir's expulsion order "have the responsibility to persuade the government in Sudan to change its decision to let the aid workers back, or they must replace with money and personnel those who have been expelled so that innocent lives are not lost and further undermined."

Clinton said the United States is "very concerned" and is looking for more effective ways to convince the Sudanese government that "they have assumed an even greater sense of responsibility and infamy in the eyes of the world by turning their backs on these refugees whom they created in the first place."

Wood said it is clear that Bashir is the sole person at fault.

"Bashir is to blame for this crisis on the ground," he said. His actions have only made things a lot worse. We are trying to get him to reverse this decision. We want to call on all those who have influence with the government of Sudan, institutions like the African Union, the Arab League, to do what they can to get Bashir to reverse his decision."

Obama, during his election campaign, made the crisis in Darfur a major focus. Since then, some have criticized him for putting it on the back burner. Seeking to rebut that view, Wood listed all recent steps the administration has taken to resolve the situation.

Last week, he said, Obama discussed the deteriorating situation in Sudan with U.N. Secretary General Ban ki-Moon. U.S. officials have been meeting in New York, Washington and Khartoum with delegations from what Wood called "like-minded nations."

Last weekend, the U.S. charge d'affaires in Sudan met with UNAMID (the African Union/United Nations operation in Darfur) and visited a camp for internally displaced people. And last week in New York, U.N. Ambassador Susan Rice spoke with the president of South Sudan and the Sudanese ambassador to the U.N.

Wood said the U.S. has been reaching out to the Arab League, the African Union and other countries with influence on Sudan, trying to convince them the decision to expel some aid groups "not only costs lives but serves to further isolate the country."

Asked whether the U.S. supports a move to defer the ICC indictment of Bashir, Wood said it does not support "any deferral."