LAGOS, Nigeria (CNN) -- More than 200 people have died of meningitis in the past week alone in Niger and Nigeria, according to the World Health Organization. 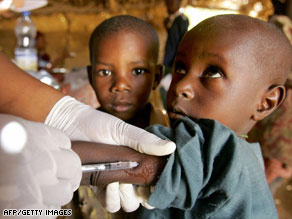 A health care worker vaccinates a child during an earlier outbreak of meningitis in Niger.

The disease is an epidemic in 76 areas of the two countries, the health agency reported Wednesday.

A spokesman for W.H.O. in Nigeria, Dr. Olaokun Soyinka, said Saturday that the outbreak is bigger than usual and stretches across the African meningitis belt from east- to west-sub-Saharan Africa.

The outbreak began around the start of the year, Soyinka told CNN. It usually peaks in the dry season because of dust, winds and cold nights, before dipping around May when the rains come, he said.

A shortage of vaccines means officials are relying on "effective prevention," in which they watch for outbreaks and then vaccinate people in the epicenter and surrounding areas, Soyinka told CNN.

There have been nearly 25,000 suspected cases and more than 1,500 deaths in the meningitis belt in the first 11 weeks of the year, W.H.O. reported. More than 85 percent of those cases happened in northern Nigeria and Niger.

Nigeria's Ministry of Health has reported 17,462 suspected cases of meningococcal disease, including 960 deaths, the world health agency said. In the past week, it reported 4,164 suspected cases with 171 deaths.

Sixty-six local government areas in Nigeria have crossed the epidemic threshold. Epidemic thresholds are a way the W.H.O. confirms the emergence of an epidemic so it can step up vaccinations and other management measures.

Niger's Ministry of Health has reported 4,513 suspected cases of meningococcal disease, including 169 deaths, since the start of the year. In the past week, 1,071 suspected cases and 30 deaths have been reported, the W.H.O. said.

Ten of Niger's 42 districts have crossed the epidemic threshold.

By comparison, other countries are reporting fewer than 50 cases a week.

Meningitis is an infection of the meninges, the thin lining that surrounds the brain and the spinal cord. Several different bacteria can cause meningitis but Neisseria meningitidis -- which is to blame for this outbreak -- is one of the most significant because of its potential to cause epidemics.

CNN's Christian Purefoy in Lagos, Nigeria, contributed to this report.