Children best raised in their own environment, charity says

(CNN) -- Madonna is in Malawi this week attempting to adopt a second child from the African nation. A judge ruled Monday that she will have to wait until Friday to learn a decision. 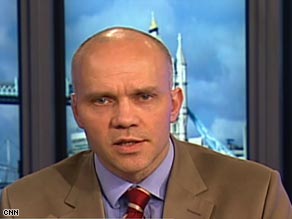 Dominic Nutt of Save the Children UK has urged Madonna to rethink her adoption of a girl from Malawi.

In the meantime, a children's group is saying that she should not adopt and that the child would be better off in her own country. Madonna has brushed off questions from reporters, saying it is "none of their business."

CNN's Kiran Chetry, spoke with Dominic Nutt, the spokesman for Save the Children UK, Monday on "American Morning."

Chetry: You heard Madonna ... say it's no one's business. Over the weekend, you came out, though, and urged Madonna to rethink this adoption. What is your biggest concern?

Nutt: Well, our biggest concern is that we believe that in the most -- in the majority of cases, orphans, so-called orphans, in fact [are] not orphans -- they have at least one parent living -- and even those that don't, have a wider family that can look after them. And we believe that children in poverty should be best looked after by their own people in their own environment. And that people like Madonna and organizations like Save the Children are best off helping those families by building schools and supporting them to look after these so-called orphans and not transporting them to live across the world in mansions, in pop stars' mansions, that sort of thing.

Chetry: Now, Madonna also is doing both, I guess you could say, because she founded that organization, Raising Malawi, right, back in 2006, did a documentary as well, trying to bring attention and money to the plight of the children there.

Nutt: Well, absolutely right. So she's obviously accepted the logic of the Save the Children argument, it's help children on the ground. If you really do love a child and you want the child to do well, then help them in their own world.

Now, look ... something like 10 million children a year die across the world because of poverty before the age of 5. You cannot possibly help all those children by moving them.

amFIX: Your thoughts on whether Madonna should adopt

So, what we're saying clearly is not that Madonna is wrong or families and parents or want-to-be parents who do go for international adoption are wrong. But it must be a last resort.

Chetry: All right, well, here's what a couple of people who actually live there say. One of them is a resident of ... Malawi, who said, "We're poor people. If a child's mother dies, it's hard for the man to bring the child up." He's saying that because apparently in this situation, the child she's trying to adopt, Mercy James, both -- neither parent [is] living, according to our report.

And then I want you to hear also from the Law Commission of Malawi, one member of it, and what he said about this adoption. Let's listen.

Unidentified male: If you project 20 years from now, where will the child be if the child is left in the orphanage where it is, or if it gets a chance to get an education with Madonna.

Chetry: The figures also from UNICEF show that for every 1,000 births in Malawi, 120 children die. The life expectancy in that country is only 44 years old. And most children over the age of 10 do not attend school. So, wouldn't life be better for some of these children who have no living parents, who would at least be in another country where their basic needs could be met and they could get a decent education?

If we are concerned about the population of Malawi being in a very difficult situation, we can't transport them all to Queens in New York or to Kensington in London to make that difference. The difference has to be made on the ground. Otherwise, we really are shuffling the deck chairs on the deck of the Titanic.

Chetry: All right, well, they're not necessarily mutually exclusive. So, the question that I have is: Is your issue really with Madonna? I mean, you mentioned celebrity and living in mansions. But what about just ... some middle-class ... working people who are unable to have children themselves and would like to try to help out a child in need overseas. Are you against that type of adoption?

Nutt: No, no. All I'm saying is that it's definitely a last resort. Because I know the pain of trying to have a child. I've been trying, my wife, for years, and we just got lucky four weeks ago. But I know that heartache and that lack of being able to bring up a child in a loving environment.

But we know from our case studies in working in Liberian orphanages that in many cases, these children are [picked] off the Internet, without much research going on, and sometimes it doesn't work out, and the children can be sent back to their own country. And all that has happened is that that child's life has been messed around with.

So, of course, it's difficult. And I wish I could give you an easy answer and offer you a magic wand, but if you challenge poverty on the ground in these countries, you can in the end do very well by these children. Save the Children's been doing it for 90 years across the world, and it's making a difference.

... You say it's not mutually exclusive, of course, but you can bet your bottom dollar that by investing in children, you'll get a much bigger impact and better outcome than by taking one or two children here and there as a matter of willy-nilly choice.

Chetry: All right, Dominic Nutt, spokesman for Save the Children UK, thank you for your point of view this morning. And we also want to let people know that we did reach out to Madonna's spokeswoman. So far, we're just getting "No comment."

All About Save the Children • Madonna (Entertainer)