(CNN) -- Three former guerrilla leaders -- who helped command what one activist called "one of the most brutal rebel movements in modern days" -- were sentenced Wednesday in Freetown, Sierra Leone, for crimes against humanity. 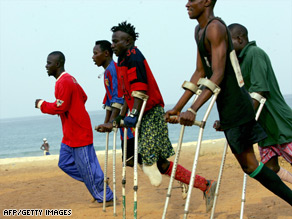 The U.N. Special Court for Sierra Leone found the men guilty in February of crimes that included murder, rape, sexual slavery and forced marriages stemming from a civil war that lasted from March 1991 to January 2002. They were arrested in March 2003, said Peter Anderson, spokesman for the U.N. court.

The rebels -- former leaders in the Revolutionary United Front guerrilla movement -- were known for hacking off civilians' hands and feet during the war, which stood out for its viciousness even on a a continent that has suffered many horrific conflicts.

The former rebels received credit for the six years each already has served in prison, Anderson told CNN.

He said they will be imprisoned in another country, maybe Rwanda, because the prisons in Sierra Leone do not meet the standards of the U.N. court.

Kallon was the only one of the three to express sorrow at his sentencing, Anderson said.

"He really had made a genuine expression of remorse," which is considered a stronger statement than regret, the court spokesman added.

The court noted several mitigating factors at the sentencing, but "in view of the gravity of the crimes, their impact was limited," a statement from the court said.

The court noted that the crimes "were committed upon a massive scale across several districts of Sierra Leone" and that "the impact of all these crimes upon the Sierra Leonean society has been enormous."

"The Chamber concluded that the inherent gravity of the criminal acts for which Sesay, Kallon and Gbao have been convicted is exceptionally high," the statement said.

"The RUF were renowned for leading one of the most brutal rebel movements in modern days. Everyone knows about the signature atrocity of limb amputation, but there was also horrific sexual violence, abductions, use of child soldiers and forced marriages," she told CNN by phone from Senegal in West Africa.

Eight people have been convicted of war crimes connected with the conflict -- some on the rebels' side and some on the government's.

The U.N. Special Court's mandate is to try only "those who bear greatest responsibility for atrocities committed in Sierra Leone."

The trial of Sesay, Kallon and Gbao lasted nearly five years. The three had pleaded not guilty on all counts.

The Revolutionary United Front seized most of Sierra Leone from the government and fought international and African peacekeepers. International forces retook the capital, Freetown, in 2000.

The trial of the three former leaders was the last of three to be held at the Special Court.

Former Liberian President Charles Taylor is on trial separately at an international court in The Hague, Netherlands, for his role in the conflict. The prosecution rested in the Taylor case in January after a year of presenting its arguments.

Sierra Leone is known for its diamond wealth, but 70 percent of the population lives below the poverty line.

The Special Court is an independent tribunal established jointly by the United Nations and the Sierra Leone government. It is mandated to bring to justice those most responsible for atrocities committed in Sierra Leone after November 30, 1996.