(CNN) -- The battle for control of the U.S.-flagged Maersk Alabama began with a bold move by some of the crew to jump the pirates, crew members say. 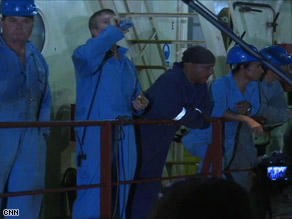 The crew of the Maersk Alabama exchange some words with media after the ship docked in Mombasa, Kenya.

Snippets of information are starting to emerge about how the Alabama's crew managed to retake the ship after it was hijacked by pirates Wednesday about 350 miles off the coast of Somalia in the Indian Ocean.

The Alabama docked Saturday night in Mombasa, Kenya. Its captain, Richard Phillips, is being held by pirates in the ship's lifeboat in the Indian Ocean.

Crew members smiled broadly as they stood on the ship's deck under the watchful eyes of security teams. Although they were kept away from the media, CNN's Stan Grant got close enough to ask them what happened after the pirates climbed aboard the ship.

A crew member said he recalled being awakened around 7 a.m. as the hijacking began.

"I was scared," Grant quoted the man as saying.

Some of the crew managed to hide in a secure part of the Alabama as the pirates stormed the ship, the sailor said.

As the men described the clash, a crew member pointed to one shipmate and said, "This guy is a hero. He and the chief engineer, they took down the pirate. ... He led him down there to the engine room and then they jumped him."

The shipmate added that he stabbed the pirate in the hand and tied him up.

Another crew member shouted, "Captain Phillips is a hero."

The father of first mate Shane Murphy on Saturday offered thanks for the "tremendous outpouring" of support his family has received from the public and government officials, including U.S. Sens. Ted Kennedy and John Kerry.

Capt. Joseph Murphy told reporters the safe arrival of his son in Kenya is "the best Easter present."

Joseph Murphy, an instructor at the Massachusetts Maritime Academy, said he had spoken to his son but that he didn't have details on the standoff.

"He said, 'Dad, this has been unbelievable.' He said the facts will be known very soon. He said he couldn't speak about anything," Joseph Murphy said.

"I said this is going to be a tough sea story to overcome. He's got a great sea story here."

Joseph Murphy said Saturday that he and the Alabama crew's primary concern was for the ship's captain.

"He's made a tremendous sacrifice for his crew. Just incredible courage. We're very, very thankful. He's done everything he could possibly do and he has saved our son," he said at a news conference.

"We believe that Captain Phillips will survive the situation. We want him to know he has the support of all of us -- the American people and people around the world."

Phillips became a captive sometime during the hijacking Wednesday. Since then, the destroyer USS Bainbridge has arrived on the scene to try to free Phillips with the help of the FBI.

An attempt by Phillips to escape from the 28-foot covered lifeboat was thwarted by a pirate who dove into the Indian Ocean after him. Phillips' captors appear to have tied him up afterward, Pentagon officials said.

The Alabama resumed its course on Thursday for Mombasa, its original destination, carrying food aid and an armed 18-person security detail.

Maersk president and CEO John Reinhart told reporters Saturday that the crew will stay on board in Mombasa while the FBI conducts an investigation.

The agency will look into the hijacking and hostage-taking, two law enforcement officials told CNN. The probe will be led by the FBI's New York field office, which has responsibility for looking into cases involving U.S. citizens in the African region.

Reinhart said the crew has reported being in good health and that the entire crew has "showed the professionalism of a true mariner."

He said the crew has asked the company to do everything it can to get Phillips home safely -- an effort he said Maersk is working on with the Navy.

"That means don't make a mistake, folks," Reinhart said. "We have to be perfect in our execution."