(CNN) -- An e-mail from one of the crewmen aboard the Maersk Alabama tells a gripping tale of sailors fighting back against pirates who had taken over their ship. 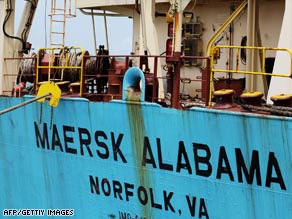 Crewman Matt Fisher hopes other ships can learn lessons from the Maersk Alabama takeover and recapture.

It also contains some of the lessons they learned and hope to pass on to others who could face the same danger.

Crewman Matt Fisher sent the e-mail to a fellow sailor aboard another Maersk ship. The U.S.-flagged Alabama was already heading to Kenya when he sent it, but it was before the U.S. Navy rescued the cargo ship's captain, who was held hostage on a lifeboat by the four pirates.

"The pirates got up to the bridge very quickly once they were onboard," Fisher wrote. "We had a locked cage door over the ladder well from main deck, but it only took a second for them to shoot it off. They then got to the bridge up the outside ladders."

Fisher said that Capt. Richard Phillips and three other sailors were on the bridge when the pirates arrived, adding that he didn't know why they stayed.

The rest of the crew, Fisher said, headed below and took positions in the engine and steering areas. One sailor kept watch in the engine control room, he said, while another "was out on deck tracking the pirates' movement."

"We kept swinging the rudder side to side," Fisher wrote. "The pirates' boat capsized, though I'm not sure exactly when or what caused it. After about 20 minutes, the engine was killed, I don't know by whom."

After the engine was killed, the sailors shut off the power to the ship as well as the fuel line to the ship's emergency diesel generator.

"I think this was critical," Fisher wrote. "The pirates were very reluctant to go into the dark."

Fisher said the sailors were safe where they were, since the pirates had no grenades and would never have been able break through with only firearms. The only problem, he said, was the heat and a shortage of water.

"In the future, we will store food and water in various spots for emergency usage," he said. "I think we will also run a fresh water line into the steering gear."

Fisher said the sailors were able to sneak up to the engine room water fountain and filled some bottles, and the sailor who'd been on deck tracking the pirates dropped fruit and sodas from the ship's galley through a standpipe to the hidden sailors.

At one point, Fisher wrote, the pirates sent one of the four sailors who had remained on the bridge to hunt for the other crew members -- unescorted.

He escaped and joined his comrades. Later, one of the pirates escorted another sailor into the engine room, again searching for the missing crew members, but one of the sailors "was able to jump him in the dark and we took him prisoner."

"No one else came down into the E/R (engine room)," he said. "As the day went on, the pirates became desperate to get out of there."

Phillips finally talked the pirates into taking a small boat used for rescuing a sailor who falls overboard. The three remaining pirates and the captain went down into the boat, and the sailors, now in control of their ship again, dropped food, water and fuel to them.

But the small boat wouldn't start. The sailors on board the ship dropped the lifeboat into the water and took it -- and their prisoner -- to the stranded boat with the pirates and the captain, intending to trade boats and prisoners.

"We were supposed to exchange their guy for the Captain, but they ended up keeping him," Fisher wrote. "They motored off in the lifeboat. They had no way of getting back aboard, so we followed them."

A few hours later, the USS Bainbridge arrived on the scene.

"We stayed close by for some time, but then the Navy asked us to head out," Fisher said. "I heard that several other pirate vessels were heading our way and the Navy wanted us out of the way. That's about it."

Eventually, Navy SEALs shot and killed three of the pirates aboard the lifeboat. Phillips was freed, and the remaining pirate was taken prisoner. But the Maersk Alabama, with U.S. Navy protection aboard, was nearing Mombasa, Kenya, by that time.

At the end of his e-mail, Fisher went over the what the Alabama's crew had learned.

"Have a well-fortified location with food and water supply. Kill all the lights. Leave the alarms going, the noise helped cover our movements through the house. Flashlights and radios are very handy, as well as the sound-powered phone."

"It was a pretty stressful situation," Fisher wrote. "I have to say I am impressed with how the entire crew responded. We didn't have anybody who wanted to give up."

Fisher also said he was "pretty confident" that his captain would come out of the ordeal "OK."

"They have to know that if they kill him they'll be done," he said.

All About Maersk Alabama • U.S. Navy