(CNN) -- Pirates captured a Belgian ship and said they were taking it to the coast of Somalia after the vessel was reported missing early Saturday, NATO and pirate sources told CNN. 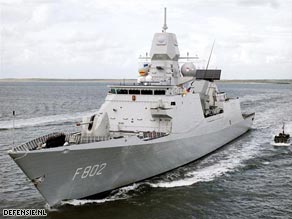 The Pompei, a Belgian-registered ship believed to have a mostly Belgian and Croatian crew, was one of two vessels that came under attack near the Indian Ocean island nation of Seychelles on Saturday, the sources said.

The second ship escaped the attack after a brief exchange of gunfire with pirate vessels, the pirate source added.

Meanwhile, Dutch naval forces captured seven pirates and freed 20 captive fishermen after tracking the pirates to their "mother ship" in the western Gulf of Aden on Saturday, a NATO maritime spokesman said.

The Belgian government tried to communicate with the Pompei "without success" before the ship was confirmed to have been hijacked, according to an official.

"This morning we received two different channels, a silent alert, that there was a problem on the boat, which is a Belgian boat on its way to Seychelles," Belgium Government Crisis Center spokesman Peter Martens told reporters. "We tried to have a contact with the ship but without success until now."

The archipelago where the attack occurred is roughly 800 miles off the Somali coastline.

"Somali pirates are getting wilder and out of control," pirate spokesman Ali Sugulle said on April 11. "They go too far away from the Somali [coast] and go to the Kenyan coast even."

The European Union, NATO and the United States have been patrolling the waters off Somalia since an upsurge in piracy in the region last year.

No NATO vessels were in the region at the time of the attack, said Cmdr. Chris Davies from NATO's Maritime Component Command Headquarters in Northwood, England.

The Dutch frigate De Zeven Provincien was with the NATO fleet patrolling the region.

After the Dutch disarmed the pirates, they released them, Shona Lowe, a spokeswoman from the maritime headquarters, told CNN. Because the crew was on a NATO mission, they lacked the jurisdiction to hold them, according to reports.

The MT Handytankers Magic is part of a fleet belonging to Handytankers, a company that distributes petroleum products in Europe, the Mediterranean, and the United States, according to the company's Web site.

Last week pirates attacked a U.S.-flagged ship, the Maersk Alabama, off the Somali coast. The crew regained control of the ship but the captain was taken hostage and held for five days on a lifeboat. The crisis ended when U.S. Navy sharpshooters shot and killed three of the pirates who were holding the captain.

All About Somalia • Pirates • NATO • Gulf of Aden