JOHANNESBURG, South Africa (CNN) -- The ruling African National Congress is expected to win Wednesday's elections in South Africa by a landslide, but polls predict it might lose its two-thirds parliamentary majority. 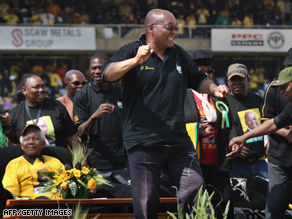 ANC leader Jacob Zuma and Nelson Mandela, seated, share a stage at a rally in Johannesburg on Sunday

The ANC, led by Jacob Zuma, has gained votes in every election since 1994, but a new player, Congress of the People, threatens the party's grip on power.

Congress of the People -- or Cope -- is a breakaway faction of the ANC. The ANC has been dogged by corruption and accused of failing to deliver services to the poor. Fielding a controversial leader as its presidential candidate has not done the party any favors.

Until early this month, Zuma, who is practically the country's president-in-waiting, was facing fraud and corruption charges. The charges were dropped two weeks before the elections because of alleged political interference in his case.

That decision by the country's prosecuting authority sparked widespread outrage, with opposition parties accusing prosecutors of buckling under political pressure.

Nevertheless, Zuma is expected to take over as president. At a news conference, Zuma reassured South Africans that his party will use its majority responsibly.

"We will not ride roughshod over the rights of the people or bulldoze other parties into submission," Zuma said. He added that he does not believe there is a cloud of suspicion hanging over him.

"According to the country's constitution, you are innocent until proven guilty, so there is no cloud, not even mist," Zuma told reporters.

In the past 15 years, the ANC has built 2.8 million houses and provided running water, sanitation and electricity to the poor. South Africa boasts a robust constitution and the strongest economy on the continent.

Yet more than one million people still live in shacks, and the newly constructed homes have been found to be substandard, with many falling apart even before being handed over to beneficiaries.

That's the result of the awarding of government contracts to pals rather than those competent to carry out the work.

And though the country's economy has grown, it has not produced significant job opportunities. One in four adults is unemployed. At the same time, many senior members of the ANC have created wealth for themselves while a majority of the country's citizens wallow in poverty.

And though South Africa won the bid to host the Football World Cup in 2010, many say that the billions that are being spent on the tournament could be better used to lift the lives of the needy.

Despite all the criticism, the ANC remains hugely popular. Most South Africans still consider the party of Nelson Mandela as their only political home. It is the party that helped end apartheid and bring democracy to the country. The only party that a majority of the country's citizens, who are black and poor, believe can transform their lives.

The emergence Cope has however unnerved the ANC.

Launched in December, Cope is made up of former ANC members who quit following ANC's sacking of Thabo Mbeki as the country's president.

The latest polls predict Cope will get 15 percent of the vote, with the country's official opposition, the Democratic Alliance, projected to receive 16 percent. The ANC is expected to garner 60 percent, short of the two-thirds majority it is gunning for.

A look at the main players:

Cope's presidential candidate, Mvume Dandala, is a former priest who was also an anti-apartheid activist. Cope has become an alternative for the country's middle class, which traditionally voted for either the ANC or the Democratic Alliance. It is also targeting those who are dissatisfied with the ANC's delivery of services and rampant corruption, and those who do not want Zuma, who was acquitted of rape in 2006, to become president.

The Democratic Alliance has had various election campaigns that have not gone down well with black South Africans. According to its own post-elections report, its "Fight Back" campaign of 2004 alienated black voters who saw it as aggressive and offensive. Its latest poster campaign also has caused controversy. It reads, "Stop Zuma vote DA." Despite the growth of its black support base, most black South Africans still consider it a white party that is concerned only with promoting white interests.

There are 40 parties vying in the elections, with 26 participating nationally and 14 provincially. Though South Africa's opposition parties remain generally weak, the ANC worries that collectively they may eat away at its majority.

So the ruling party has brought 90-year-old Nelson Mandela out of retirement to take part in two of its election rallies -- a strategy to remind South Africans that their most adored politician remains a loyal member of the ANC.

And that the ANC under Zuma, despite its imperfections, is still the ANC of the man who helped bring democracy to South Africa.