(CNN) -- Countries have pledged $213 million at an international conference to boost security in Somalia and halt the country's growing piracy problem. 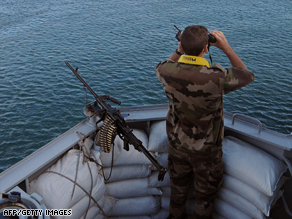 Somalia's prime minister says the international naval patrols are having little effect on the piracy problem.

"We have a unique opportunity to support leaders who have shown a commitment to building peace and rebuilding the Somali state," Secretary-General Ban Ki-moon said. "By opening the space for security, we open the door to a better life for Somalia's people."

"The risks of not supporting the new government are too high and the costs of failure too enormous," Ban added.

Organized by the European Union, the conference included leaders from the United Nations and African Union.

As the pledges rolled in, Somalia's prime minister said international naval patrols in the Gulf of Aden were not solving the problem of piracy in the region.

Prime Minister Omar Abdirashid Ali Sharmarke pointed to the recent increase in pirate attacks as evidence, and called for the U.N. arms embargo on Somalia to be lifted so the government can fight back against the pirates and militant Islamist groups.

"One of our biggest problems is that al-Shabaab has AK-47s, and the pirates have AK-47s, and the government has AK-47s," the prime minister said in Nairobi, Kenya. Al-Shabaab, which the U.S. considers a terrorist organization, is an Islamic militant group that controls much of southern Somalia.

"You can't expect the government to win against such a problem. The only way is to have sufficient capability, and it starts with lifting the arms embargo. You know, we have been handicapped by those sanctions."

The arms embargo on Somalia has been in effect for more than 16 years. Most serviceable weapons and almost all ammunition currently available in the country have been delivered since 1992, in violation of the embargo, according to the U.N. Security Council.

Pirate attacks on ships in the Gulf of Aden and off Somalia's coast accounted for 61 of the 102 attacks during the first quarter. That compares with six incidents for the same period in 2008, said the International Maritime Bureau, which issues regular reports on piracy worldwide.

The European Union and several nations, including the United States, have naval forces in the region to protect vessels against pirate attacks. The head of EU naval forces in the waters off Somalia said he thinks navies can defeat pirates on the high seas, but ultimately restoring long-term stability to Somalia will be what stops the attacks.

Still, Rear Adm. Philip Jones said: "It'll be a long period of time before that's successful, and we must be ready to secure the seas until that's in place."

"Assisting Somalia's new government to establish increased security and stability across the country is critical for tackling the root causes of piracy," the EU said in a statement about the international conference in Brussels, Belgium. "Recent events show that piracy is increasingly putting in jeopardy the security of ships in the Gulf of Aden and in the wider maritime region."

A dramatic increase in activity by Somali pirates led to a near-doubling in the number of pirate attacks globally in the first quarter of 2009, according to the International Maritime Bureau.

Ahead of the conference, Ban indicated that he was not ready to send U.N. troops to Somalia. The idea of a U.N. peacekeeping force is divisive, he said, and "could exacerbate the conflict if pursued too soon."

Instead, Ban recommended supporting the existing African Union force in Somalia, helping build Somalia's security institutions and supporting political reconciliation in the country. If that works, the United Nations would open a political office in Somalia to support the country's political process, Ban said.

Then, if the U.N. presence succeeds, the Security Council could decide on a U.N. peacekeeping operation to take over from the African Union force, he said.