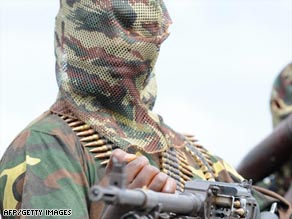 Militants from the Movement for the Emancipation of Niger have attacked soldiers escorting oil workers.

The militant group, however, issued a statement saying the Nigerian armed forces launched an unprovoked attack on its camps. It issued a warning to oil companies in the region to evacuate their staff to avoid escalating violence.

Abubakar, however, said, "There is no truth to what the militants are saying."

The militants said the fighting continued to rage, while the army said it had stopped.

The movement demands that more of the country's oil wealth be reinvested in the region instead of enriching foreign investors. It also demands the release of prisoners it believes are being held for political reasons.

In the past, militants have taken American and European oil workers as hostages. A sick British oil worker, held for seven months, was released a month ago.