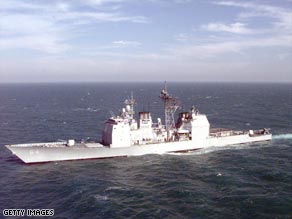 The South Korean destroyer ROKS Munmu the Great and cruiser USS Gettysburg launched helicopters in response to a distress call from the MV Amira, the Navy statement said. While en route to the Egyptian-flagged ship, they spotted a dhow that the navies suspected was being used as a pirate "mother ship."

It was the first time the anti-piracy task force CTF 151 had captured suspected pirates, the Navy said.

Numerous military ships from around the world have been dispatched to patrol the waters off the coast of Somalia in the face of an explosion in piracy in the region over the past several years.

Pirates currently hold 15 ships, said Cyrus Mody of the International Maritime Bureau, which monitors piracy worldwide. All those ships were seized in the waters off the east coast of Africa, he told CNN.