(CNN) -- In many cases it's a woman that grips the blade -- maybe clean, maybe dirty -- that cuts a girl's path to womanhood. 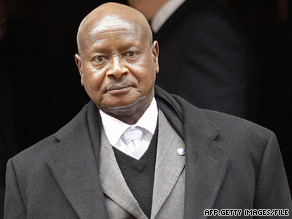 Ugandan President Yoweri Museveni wants to ban the practice of female circumcision in his country.

The cutter, who works for a fee, can pursue any number of surgical options for the young girl's rite of passage. She can remove the girl's clitoris entirely, narrow her vagina with stitches, or make other excisions of the girl's genitalia.

A traditional symbol of a child's maturity to womanhood, the girl undergoes a circumcision. Often without an anesthetic, she feels every slice.

And sometimes girls that become women under the knife die under it, too.

In Uganda, President Yoweri Museveni wants to outlaw female circumcision, and those that continue to perform the bloody practice would face the death penalty if a girl dies as a result of the procedure, Press Secretary Tamale Mirundi told CNN Wednesday.

"If a girl dies during circumcision that would be murder," Mirundi said. "The punishment for murder in Uganda is death. You will be hanged."

But in nearby Kenya and Tanzania, where female genital mutilation is illegal, the practice is still rampant because people are not sensitized to the health consequences of circumcision and laws are not enforced, said Godfrey Odongo, an Amnesty International Uganda researcher.

While Amnesty International does not support the death penalty, Odongo said the group wants to see Uganda ban the practice. He worries it won't be done, though, because Uganda has a "mixed" track record on enacting laws to protect women, he said.

Mirundi, however, said he thinks that with the president's support behind it, Uganda's parliament will outlaw the ancient ritual.

Rooted in paternalistic culture and practiced for centuries, female circumcision in Uganda is thought to protect a girl's chastity by "reducing the urge for sex in women," Mirundi said.

In Uganda, female genital mutilation is popular among tribes that live near the eastern border with Kenya, Mirundi said. He said he does not know how many female circumcisions have occurred in Uganda nor how many girls have died from them.

The Sabini and Karamajong tribes are the primary adherents to the custom of female circumcision, he said. The tribes, he said, make up less than 10 percent of the country's population, which the World Bank estimated at 29.9 million in 2006.

The World Health Organization estimates that 100 million to 140 million girls and women have been circumcised. Another 3 million girls are at risk of being circumcised each year, the organization says. The practice is extremely painful and traumatizing, and can result in prolonged bleeding, a higher risk of HIV infection, infertility and even death, according to the United Nations Children's Fund.

The cultural practice occurs in parts of Africa, Asia, the Middle East and in some immigrant communities in Europe and North America, with the majority of those who have undergone the procedure living in 28 countries across Africa, according to the United Nations Population Fund.

Mostly women perform the circumcisions on girls ranging in age from infancy to 15, the U.N. Children's Fund said. In some cultures, women endure repeated circumcisions.

Those that do the cutting in Uganda earn an income on the procedure, Mirundi said. What once was done for free and deemed a privilege to perform now rakes in less than $1 per girl, Mirundi said. Even for a country that the World Bank reported as having 53 percent of people living on $1.25 or less a day, "It was not big money," he said.

"Poverty is quite a big factor and directly intrinsically linked to the economic interest [in female circumcision]," Odongo said.

Museveni proposes to distribute money to the practitioners to give them financial support until they find other work, Mirundi said. The money could come in the form of a low-interest rate loan, he said.

Governments and local leaders must promote other ways to earn an income to successfully outlaw female circumcision, said U.N. Population Fund spokesman Abubakar Dungus. Tribal leaders, especially, must insist on alternatives to the cutting ceremony, such as gifts, he said.

While referred to as a rite of passage, the cutting also subjugates women to a chastity reinforced by scars and a culture that dictates that circumcised girls are more attractive to prospective husbands.

"Very often it's the mother of the girl who takes her daughter to be cut. You know the reason?" Dungus asked. "Because she feels, 'Oh my god, my daughter won't get a husband if I don't cut her."

Soraya Mire's mother took her to be circumcised when she was 13. The Somalia native said she felt "tricked into it by a person that was supposed to protect me -- my own mother." Mire, now 47, in 1994 released a movie detailing the practice, "Fire Eyes." When the activist heard that Museveni wants to outlaw female circumcision, it brought back memories of her own experience of being "stitched like a curtain," she said.

"I thought of my first pain as a child of 13 and realizing this was not really love; this was not a gift of womanhood," she said.

Mire, who received corrective surgery and has helped other women get corrective surgery, is writing a memoir about her trials as a "survivor" of female genital mutilation and the struggles to reconcile with a family that shunned her after she spoke out against the practice.

She said that speaking out against female circumcision is not a betrayal of culture, it is a public acknowledgment of what is right and what is wrong.

For Museveni, it is a movement toward modernity.

"You must grow out of that culture that is not supported by scientific information," Museveni says in a statement posted on his Web site.