(CNN) -- Former Liberian President Charles Taylor expressed his incredulity at the testimony against him at his war crimes trial Tuesday, saying "there is no way" he is guilty of any of the charges. 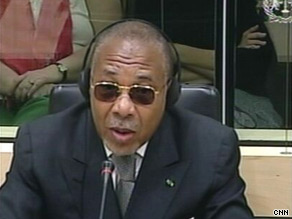 Taylor is the first African head of state to go on trial for war crimes before the international tribunal.

Taylor, 61, is accused of fueling a bloody civil war in neighboring Sierra Leone that led to widespread murder, rape, and mutilation. The conflict ended in 2002.

He is the first defense witness at a trial that began two years ago at the Special Court for Sierra Leone, which is being held at The Hague, Netherlands.

"I am not guilty of all of these charges, not even a minute part of these charges," Taylor, president between 1997 and 2003, said in the first day of defense testimony. "This whole case is a case of deceit, deception, lies."

The decade-long war, which involved riches from the diamond trade, was fought largely by teenagers who were forced to kill, given addictive drugs to provoke violent behavior, and often instructed to rape and plunder.

He has pleaded not guilty to the charges.

In his first statement to the court Tuesday, Taylor responded to accusations that he is a murderer and a terrorist.

"It is quite incredible that such descriptions of me would come about. Very, very, very unfortunate that the prosecution -- because of this information, misinformation, lies, rumors -- would associate me with such titles or descriptions," he said.

"I am none of those, have never been, and will never be, whether they think so or not. "I am a father of 14 children, grandchildren, with love for humanity," Taylor said.

"I resent that characterization of me. It is false, it is malicious, and I stop there."

The United Nations and the Sierra Leone government established the Special Court for Sierra Leone in 2002. The U.N. decided to move Taylor's trial from Sierra Leone's capital, Freetown, to the Hague last year because of concerns that Taylor's presence would harm stability and security in the region.

The trial opened in June 2007, but Taylor boycotted the first session, saying he could not expect a fair trial and calling the proceedings a "charade."

The prosecution began its case in January 2008 and finished in February this year.

Taylor is the first African head of state to go on trial for war crimes before an international tribunal.

He was president of Liberia -- where he is also blamed for fueling a lengthy civil war -- until 2003, when he was forced from office under heavy international pressure, much of it from the United States. He lived in exile in Nigeria until Nigerian President Olusegun Obasanjo decided, under political pressure, to hand him over to the tribunal.

Taylor said he is still upset with Obasanjo for handing him over. "If you were alone in a room with Obasanjo, what would you do to him?" asked British lawyer Courtenay Griffiths, the head of Taylor's defense team.

"You know, as I sit here, I am still perplexed. I can't claim to understand all of the intrigues that happened to me," Taylor said after thinking for a moment.

Taylor also testified that he did not commit the atrocities in Sierra Leone of which he is accused, and said he even thought they were "a little strange" when he heard about them at the time.

It would have been "virtually impossible" for him to order anyone -- including the Revolutionary United Front (RUF), the rebel group in Sierra Leone -- to carry out such actions, Taylor said, because he was too occupied with running his own country.

Griffiths asked Taylor outright whether he is guilty of the offenses in the indictment, prompting a lengthy response from Taylor on why he is not.

"Quite frankly, I cannot understand how some of these people (witnesses) were brought to this point ... to tell some of the lies that I have heard sitting over there," Taylor said from the witness stand. "It's I guess what you lawyers call incredulous."

He said he couldn't understand how witnesses "can come and in an organized fashion lie -- lie and lie and lie," although he suspected that some of the witnesses were testifying because they had been threatened.

"I've got ministers -- former ministers of my government -- that wouldn't even take a phone call. (They'd) say, 'Mr. President, we're scared. If we ever talk to you, we're finished,'" Taylor said.

"This is a house constructed on disinformation, misinformation, rumors, assumptions, conjecture. Whether I live 100 years, this is the experience of a lifetime that no human --" Taylor said before he stopped himself.

He also denied even knowing that rebels were amputating people's hands and feet, a brutal signature of the civil war in Sierra Leone. He said he would have "never encouraged that."

Griffiths asked whether Taylor ever took diamonds from the rebels in exchange for giving them weapons, and Taylor responded by saying "never."

Three former top RUF leaders were convicted this year of war crimes and crimes against humanity.

The Leonardo DiCaprio movie "Blood Diamond" (2006) is set in Sierra Leone during the civil war, which lasted from March 1991 until January 2002. Despite the country's diamond wealth, 70 percent of the population lives below the poverty line.