Amadou Bagayoko and Mariam Doumbia are the blind husband and wife team from Mali who first gained widespread international attention in 2005 with their album "Dimanche a Bamako". 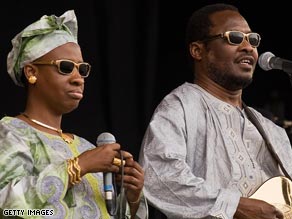 Amadou and Mariam have made the crossover to find international pop success.

After writing and performing together since they met at Institute of Young Blind of Bamako in 1977, their international break-through came when world music heavyweight Manu Chao produced their commercial hit album.

With a more pop-friendly sound but with the couple's positive and mesmeric vocals and Bagayoko's guitar playing, the duo have been feted by musicians across the world; the played opening sets for the Scissor Sisters and will be the opening act for Coldplay on their latest tour.

Having made the transition from world music to international pop sensations the couple talk to African Voices about their journey through music, coping with the setback of blindness and how their careers are on a high over 30 years after they began singing.