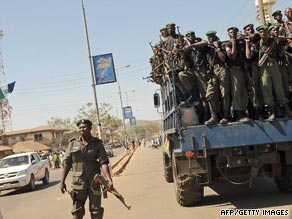 Most of the victims of violence by security forces were young Muslim men, often unarmed, the group charged in testimony before a state commission examining the riots and in a separate report.

More than 700 people died in the violence last November, the group said, citing local religious authorities on both sides of the divide.

A 26-year-old mechanic described seeing anti-riot police known as MOPOLs hunting down people near where he worked.

"I saw them enter one house just across the street from us," the unnamed witness said. "We heard shots and later we saw five bodies there. Anyone they found hiding in the garage, they shot them. They combed the garage hunting for people. This went on for about 10 minutes or so. Then they returned to their truck and left."

A third said he saw an unarmed shopkeeper plead for his life. Police ordered him to lie down on the ground, the witness said.

"He kept saying, 'Please God, allow me to live.'... One of them said, 'Today you go die,' and then he shot him in the side. Then the same MOPOL shot him again. As he was going to shoot him a third time, the other MOPOL said ... 'Leave it, he's already dead.'"

In the report, released Monday, Human Rights Watch says it "documented 133 of these killings but believes that the actual number of arbitrary killings by security forces may be substantially higher than these figures."

James Manook, a spokesman for Plateau State where the violence occurred, said the Human Rights Watch claims are "one of the issues that the commission has under inquiry, and given that - I do not want to comment while it's under investigation." However, he added, " I assure you that we remain respectful of the rule of law."

The clashes followed a dispute over an election that pitted a Christian candidate against a Muslim one in late November 2008.

Police and soldiers responded to the riots with deadly force, on the same day the governor of the state issued a "shoot-on-sight" order, Human Rights Watch said.

The group based its allegations on 151 interviews in the city of Jos in Nigeria's Plateau State, it says in the report. It withheld the names of many of the people it interviewed over the course of 18 days in December 2008 and February 2009.

The rights group said the state commission examining the riots should investigate and call for the prosecution of security forces involved.

"At least 130 men were killed by members of the very institutions charged with protecting them," said Corinne Dufka, senior West Africa researcher at Human Rights Watch.

"These investigative bodies owe it to the victims and their families to conduct a thorough and impartial investigation into these extremely serious allegations."

Local religious leaders in Jos have been trying to bridge the differences, including setting up a soccer league with teams on which Christians and Muslims play side-by-side.