(CNN) -- Fighting in the Somali capital of Mogadishu is forcing thousands of people to "risk their lives to cross the Gulf of Aden and seek asylum in Yemen," the U.N. refugee agency said Tuesday. 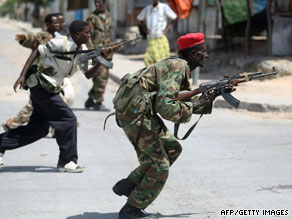 Somali soldiers move into a stronghold of Islamic militants in Mogadishu on July 12.

Since May 7, about 12,000 people have fled to Bossaso in northern Somalia where they await "the first opportunity offered by smugglers to take the perilous journey across the Gulf," the U.N. agency said.

The people are among 232,000 Somalis who have fled their homes since early May because of fighting in Mogadishu between government forces and the Al-Shabaab and Hisb-ul-Islam militia groups.

The trip to Yemen is a risk that Somalis have been taking for years.

"It's a dangerous journey. More than 1,000 drowned en route in 2008 -- thrown overboard or forced to disembark too far from the shore of Yemen by unscrupulous smugglers. So far this year, almost 300 have died or gone missing," the agency said.

The U.N. agency says the people planning to go to Yemen are expected to stay in Bossaso until September and leave when the weather improves.

"Our partners in Bossaso report that the areas where potential migrants usually settle are getting more and more crowded and smugglers are already collecting bookings and cash from Somalis bound for Yemen," the UNHCR said.

The UNHCR said it works with its partners in Yemen to help provide "basic assistance" such as food, shelter, and health care, and to get Somalis settled in camps.

"The smuggling phenomenon places increasing strain on Yemen's limited resources and poses more challenges to the government's efforts to balance its obligations under international law with the need to protect the country from illegal entry," the U.N. agency said.

All About United Nations High Commissioner for Refugees • Yemen • Somalia