700 die in fighting in northern Nigeria

LAGOS, Nigeria (CNN) -- Some 700 people have been killed in clashes with Islamic militants in Nigeria, a military commander told CNN. 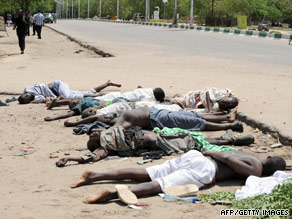 The fighting in the northeast Nigerian town of Maiduguri began with attacks by the Muslim militants on police and government targets, starting a week ago.

Previous reports said at least 400 rebels, troops and civilians had died in the region, including Borno, Yobe, Kano and Katsina states. Maiduguri is in Borno state. Ahonotu did not elaborate or provide further information, and it was unclear whether the 700 was in addition to the previous death toll.

Attacks on police and government targets have been reported throughout the region.

Boko Haram, an Islamist sect, wants the government to impose Islamic law, known as sharia, in the entire Muslim-dominated northern half of Nigeria. Sharia is already practiced in some northern states, but the sect wants even tougher religious laws and also opposes Western education.

The southern half of Nigeria is predominantly Christian.

A Boko Haram leader, Mohammed Yusuf, was reported captured Thursday by the military, but was found dead after he was turned over to police. Human rights groups are seeking more information on his death, and have also expressed concern about civilian casualties.