NAIROBI, Kenya (CNN) -- Kenya's plan to use its judiciary to try perpetrators of post-election violence reneges on an earlier pledge to use an independent tribunal, Human Rights Watch said Monday. 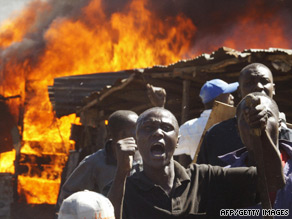 Residents of a Nairobi slum shout during clashes between rival groups in January 2008.

The fighting, which flared after the 2007 elections, killed more than 1,300 people and displaced hundreds of thousands more. It started after the main opposition candidate disputed the results, sparking some of the worst violence in the nation's history.

A commission formed to investigate concluded that the nation's judiciary was not credible enough to try the suspects, and recommended a tribunal made up of Kenyan and international judges.

If that did not work, the commission urged, the International Criminal Court should try the suspects itself.

The government pledged last year to implement the suggestions, and then re-emphasized its commitment last month.

"An independent domestic court with international participation remains the best option to start establishing accountability, and the government should immediately adopt legislation to establish the special tribunal," Human Rights Watch said in a statement.

Leaders of the East African nation have been criticized for failure to form a tribunal to try perpetrators of post-election crimes. The announcement Thursday that Kenya was exploring using its judiciary as one of the options comes amid publicized wrangling among members of the coalition government formed in the wake of the violence.

In a statement to announce the decision after a Cabinet meeting, President Mwai Kibaki said that the government was ready to pursue national healing.

"Cabinet was concerned that while it will not stand for impunity in the pursuit of justice, the country should equally pursue national healing and reconciliation," Kibaki said. "This does not in any way reduce its desire to punish impunity."

However, he acknowledged shortcomings in the judiciary system.

"It will undertake accelerated and far-reaching reforms in the judiciary, police and investigative arms of government to enable them investigate, prosecute and try perpetrators of post-election violence locally," he said.

Former U.N. chief Kofi Annan, who negotiated the deal that led to the coalition government, has repeatedly warned that the International Criminal Court would be asked to intervene if a tribunal was not established. Annan handed a list of post-election violence suspects to the ICC on July 9, a sign that he was losing patience with the delay in the formation of a tribunal.

Analysts say the administration has been against an independent court because some top officials are on the list.

The government is not putting its citizens' needs first, critics say.

"Bringing justice to these victims is the most urgent test of the coalition government's willingness to resolve Kenya's crisis," said Georgette Gagnon, Africa director at Human Rights Watch. "The Cabinet just resoundingly failed that test."