(CNN) -- Scores of protesters gathered outside a Sudanese courtroom Tuesday as the trial of a woman who faces 40 lashes for wearing clothes deemed indecent was postponed. 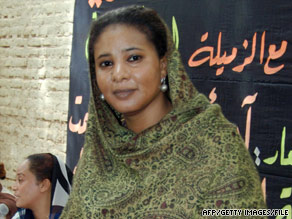 Lubna al-Hussein was told she had pants considered too tight and a blouse too transparent.

Lubna al-Hussein, who says she was arrested for wearing pants that were too tight, faces a new trial date of September 7, her attorney Nadil Adib said.

The delay was to allow the judge to consult Sudan's Foreign Ministry on whether al-Hussein is immune from the charges because she was formerly a U.N. employee, he said.

Al-Hussein -- who writes for a newspaper and worked for the media department of the United Nations mission in Sudan -- resigned from her U.N. position to deliberately lose immunity and face the charges.

She was "disappointed" with the court's decision to delay her trial, Adib said. "She wanted to have her case tried in order to clear her name and have the law announced unconstitutional," he said.

Al-Hussein was arrested along with 18 other women on July 3 at a Khartoum restaurant after police burst in and checked women for their clothing.

"I don't think she was targeted specifically," Adib said. "They attack public and private parties and groups. They are called 'morality police' and she was just a victim of a round-up."

At the time of her arrest, al-Hussein said she was wearing pants that police deemed too tight, a blouse they said was too sheer. She said she was also wearing a hijab -- or headscarf.

Protesters gathered outside the courtroom in Khartoum Tuesday to support al-Hussein, carrying banners and wearing headbands with the messages, "No return to the dark ages" and "No to suppressing women."

Others demanded an amendment to the country's public order law which human rights activists say is vague on what constitutes indecent dress.

"The United Nations will make every effort to ensure that the rights of its staff members are protected," Ban said.

"The flogging is against the international human rights standards. I call on all parties to live up to their obligations under all relevant international instruments."

Al-Hussein told the British Broadcasting Corporation that she wants a public flogging to make a point about the treatment of women in Sudan. She even sent out 500 invitations to witness her lashings.

"I'm not afraid from pain ... but flog is not pain, flog is (an) insult, insult to humans, insult to women," al-Hussein told the BBC.

"This happened in Khartoum and under the eye ... of media and all over the world ... to girl from Khartoum for only wearing trousers and sit in a restaurant," she said.

"I want people (to) imagine that. What can be happening to women in Darfur? This is my message."

CNN's Errol Barnett and Elham Nakhlawi contributed to this report.