(CNN) -- U.S. Secretary of State Hillary Clinton headed to Luanda, Angola, on Sunday on the third leg of a journey that is taking her to seven African nations in 11 days. 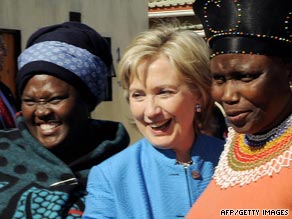 Secretary of State Hillary Clinton poses with residents of South Africa on Saturday during her 11-day trip to Africa.

The State Department has described Angola as a nation with "enormous economic potential."

The African country is one of the largest energy producers south of the Sahara Desert and is a major supplier of petroleum and liquefied natural gas to the U.S. market.

Clinton flew to Angola after a two-day stop in South Africa, where she met with the country's new leader, President Jacob Zuma, and the foreign minister.

She ended the South African trip Saturday with a visit to a housing project on the outskirts of Cape Town, where she and daughter, Chelsea, laid the first bricks 12 years ago.

Clinton opened her Africa trip in Kenya. She will also travel to the Democratic Republic of the Congo, Nigeria, Liberia and Cape Verde.

"In each nation, she will emphasize Africa as a place of opportunity, built on an ethic of responsibility," said Ian Kelly, state department spokesman.

"She will underline America's commitment to partner with governments, the private sector, nongovernmental organizations and private citizens to build societies where each individual can realize their potential."