(CNN) -- Secretary of State Hillary Clinton said Monday that she will travel to the epicenter of Africa's longest war Tuesday to try to help victims of more than a decade of regional conflict. 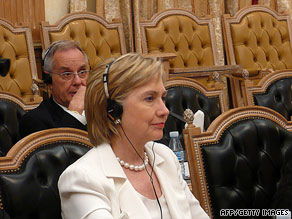 Clinton will fly on a United Nations plane to Goma in eastern Democratic Republic of Congo because the U.S. plane for her seven-nation Africa trip is too big, she said.

The Congo conflict has involved several countries and resulted in an estimated 5 million deaths from fighting and collateral problems such as disease and starvation, according to an International Rescue Committee survey conducted more than a year ago. In addition, tens of thousands of women have been raped in the ongoing regional strife stoked by competition for mineral riches.

"I will be pressing very hard for not just assistance to help those who are being abused and mistreated, in particular the women who are turned into weapons of war through the rape they experience, but also looking for ways to try to end this conflict," Clinton said.

She spoke while flying from Angola to Kinshasa, the Congo capital, after meeting with Angolan President Jose Eduardo dos Santos on the third leg of her 11-day trip.

Dos Santos noted that "there's a lot of money being made in the eastern Congo because of the mineral trade, and there has to be a way with the United States and the United Kingdom and France and Rwanda and everybody coming together and trying to prevent the mining from basically funding a lot of these militias that are keeping the fighting going," Clinton said.

Angola, a nation wracked by 27 years of civil war that ended in 2002, is a major provider of oil to the United States. The former rebel group UNITA complains that dos Santos is delaying work on a new constitution and subsequent elections to maintain his hold on power.

Clinton pressed dos Santos and the Angolan National Assembly to complete the new constitution that would formalize democracy.

"We talked at length about the process leading to a new constitution and how important it was that that be resolved as quickly as possible and elections be held," Clinton said. "We talked about greater transparency in the energy sector and what more could be done to create accountability."

On Sunday, Clinton gave some pointers to leaders of the National Assembly on American-style democracy.

"What is important is the role of both the majority and minority parties to serve as a check and balance on the executive branch of government," she said, adding, "In a democracy such as yours, the parliament must demand accountability and transparency, and stand against financial corruption and abuse of power."

Clinton opened her Africa trip in Nairobi, Kenya, and then went to South Africa and Angola. After Congo, she will travel to Nigeria, Liberia and Cape Verde.

All About Hillary Clinton • Democratic Republic of the Congo