(CNN) -- Secretary of State Hillary Clinton arrived in Cape Verde on Friday, the final stop on her seven-nation Africa tour in which she emphasized good governance and urged officials to implement reforms. 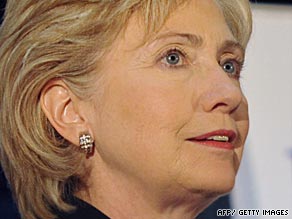 Hillary Clinton was in Cape Verde on Friday on the final leg of her Africa tour.

Clinton is scheduled to meet with Prime Minister Pedro Maria Neves before returning to the United States.

The Obama administration describes the island nation on the western coast as an African success story.

The relationship between the two countries is based on a long history of partnership, which started in 1818 when the first U.S. consulate in sub-Saharan Africa was established in the country, Myles said.

Clinton's 11-day trip started in Kenya, and has included stops in South Africa, Angola, the Democratic Republic of Congo, Nigeria and Liberia.

She arrived at Cape Verde from Liberia, where she applauded the work of pro-American president, Ellen Johnson-Sirleaf, the first woman elected head of state in Africa.

"Today, (Liberia) is a model of successful transition from conflict to post-conflict, from lawlessness to democracy, from despair to hope," Clinton said.

"For the last three years, the people of this country have been working to promote reform, reconstruction and reconciliation. Liberia has adopted sound fiscal policy and seen strong economic growth."

Clinton's trip comes after President Obama's visit to Ghana in July, where he urged African leaders to improve government stability.

During her visit, Clinton echoed Obama's sentiment on government reform. Like Obama, Clinton made it clear that America is willing to help, but from the background. African leaders must take the lead in reforming their own countries, she said.

Clinton's message was a mix of praise and criticism. She also addressed other issues including democracy, trade and sexual abuse.

Hours before her arrival in Kenya, Prime Minister Raila Odinga said that Africa did not need another lecture on good governance. But Clinton said she was delivering a "tough but lovingly presented" message to the East African nation.

"As President Obama pointed out in his speech in Ghana, Kenya has not fulfilled its economic promise because it hasn't yet realized fully what it means to have a functioning, dynamic democracy, and a free press and an independent judiciary," she said.

She urged Angolan officials to adopt a new constitution and hold a proper presidential election. However, she also lauded the nation's commitment to fighting HIV as the two countries signed a partnership to combat the epidemic.

At a town hall meeting in the Nigerian capital, Abuja, Clinton talked about the importance of democracy and warned that though Nigeria produces 2 million barrels of oil a day, its poverty rate has gone up over the past 13 years. She blamed the lack of progress on corruption.

"The most immediate source of the disconnect between Nigeria's wealth and its poverty is a failure of governance at the local, state, and federal level," she said.

During a visit to Congo, Clinton denounced sexual attacks on women and announced $17 million in funding to help fight abuse in the country.

"In the face of such evil, people of good will everywhere must respond," she said. "The United States is already a leading donor to efforts aimed at addressing these problems."

Clinton also met with the leaders of Somalia's transitional government in neighboring Nairobi. The country has been waging a bloody battle against al Qaeda-linked militants with help from the United States.

The State Department notes it is the earliest trip by a secretary of state and a president to Africa of any previous U.S. administration.

All About Hillary Clinton • Cape Verde