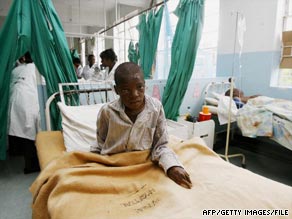 "Although Zimbabwe is not facing armed conflict, humanitarian threats such as food shortages and outbreak of diseases such as cholera pose a significant challenge," said Agostinho Zacarias, U.N. Development Programme representative in the country. "The recent [cholera] epidemic resulted in 98,592 cumulative cases, including 4,288 deaths between August 2008 and July 2009."

Cholera thrives in areas without clean water and proper sanitation, and the United Nations has said 6 million people in Zimbabwe -- more than half the population -- have limited or no access to safe water and sanitation in rural and urban areas. It also estimates more than 5 million in the nation face starvation.

Although the cholera epidemic was declared under control last month, a renewed outbreak is likely, international health officials have said.

A U.N. appeal launched earlier this year has so far raised only 44 percent of its goal of $718 million for humanitarian assistance.

But Rueben Marumahoko, a Zimbabwe junior minister and an appointee of Mugabe, said the country is no longer in crisis.

"There is need for Zimbabwe to move from the humanitarian support stage to the recovery stage," he said. "Zimbabwe is no longer a country in crisis but a country in recovery." The comment drew laughter from many journalists covering the event.

Among the nation's problems is a strike by doctors that is almost a month old. The doctors are demanding housing and car allowances and a monthly salary of $1,000 [U.S.] -- a sharp rise from the current $170 a month paid to all public servants.

Nurses joined the strike this week, saying that doctors have a genuine case that needs urgent attention.

The action is threatening the country's ability to deal with H1N1 influenza, also known as swine flu, and to prepare for the possible resurgence of the cholera epidemic.

All About United Nations • Cholera • Zimbabwe