MOUNT KENYA, Kenya (CNN) -- For as long as anyone cares to remember, the pastoralists of Kenya's Rift Valley have fled with their herds to the fertile slopes of Mount Kenya when times are tough. 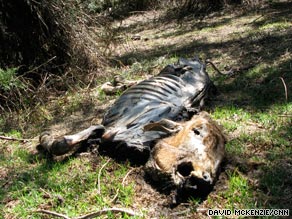 Hundreds of dead cattle litter the slopes of Mount Kenya, fatally weakened by long treks to the region.

When the rains failed this year they set off once again in search of water and pasture -- but they found only despair.

"I could have stayed home, or I could have come here, but it is all the same. All that you find is death," said Peraguan Lesagut, an aging pastoralist who came five months ago with his herd.

After years of persistent drought Lesagut left his two wives and 16 children and drove 200 cattle to the foothills of Mount Kenya -- Africa's second highest summit. Now, only 40 are left; the rest succumbing to cold, disease and exposure.

Across the folds of this mountain everyone has the same story. Hundreds of dead cattle dot the forests, young herdsmen try to coax ailing calves onto their feet, knowing that if they don't get up, they will die.

"I am hopeless because I have seen almost all of my animals die," Lesagut said. "If the rains are delayed for even another week two, then I will lose everything."

Millions of Kenyans are facing the same stark reality. The World Food Program (WFP) says that, together with the Kenyan government, they will need to feed 3.8 million people across the country.

Successive years of failed crops, drought and erratic rains caused by climate change have all had an impact. Somalia, Ethiopia and Djibouti all face similar crises. Despite this, the U.N. agency says that its emergency programs are facing massive shortfalls.

"We are facing a really difficult situation. We realize that the world economic crisis has affected the amount that countries can give to us," says WFP spokesperson Gabrielle Menezes, "But at the same time we are seeing an awful situation in Kenya. If we don't start feeding people now, things are only going to get worse."

For many Kenyan farmers, the situation is already bad enough. Eunice Wairimu has seen four successive crops fail. This is harvest time in Kenya but her corn plants barely reach her knees and she will have to use her meager harvest as animal feed.

"I don't even like to go to my farm because I become very upset," she said. "There is nothing for me to get there for my family."

Wairimu used to sell her surplus, but now she depends on food rations. She accepts them grudgingly.

"According to our tribal culture, we aren't used to being given food. We have always been willing to work hard. If it is the will of God to bring rain, he will bring rain. But he also brings drought."

All About Drought • Kenya • East Africa