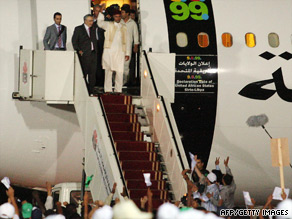 Britain refused, telling the Libyans that al Megrahi would not be eligible under an overall prisoner release agreement. Gadhafi, the second-eldest son of Libyan leader Col. Moammar Gadhafi, said the refusal angered the Libyans.

The agreement was eventually signed late in the year.

Gadhafi, who was involved in the negotiations for the prisoner release deal, accompanied al Megrahi back to Libya last month after he was freed from a Scottish prison on compassionate grounds.

Al Megrahi was released because he suffers from terminal prostate cancer, and Gadhafi said his release was not part of the trade deals.

In an interview with Libyan channel Al Mutawassit on board the plane that carried al Megrahi from Scotland to Tripoli on August 21, Gadhafi said that al Megrahi "was always on the negotiating table" during the talks, prompting British officials to flatly deny that al Megrahi's release was predicated on any deal.

"It's not only completely wrong to make any such suggestion, it's also quite offensive," Peter Mandelson, Britain's secretary of state for business, said in an interview.

Gadhafi told CNN that the prisoner release agreement was negotiated for seven years -- though al Megrahi was not mentioned by name -- and was part of "normal" negotiations between the two countries that included security issues and oil.

Al Megrahi was convicted of killing 270 people by bombing Pan Am Flight 103 over Lockerbie in Scotland in 1988. He was sentenced to life in prison.

Gadhafi said his release was on the condition that Libya would drop any appeals.