(CNN) -- A woman put on trial for wearing clothing deemed indecent by Sudanese authorities was jailed Monday for refusing to pay a court-ordered fine, her lawyer said. 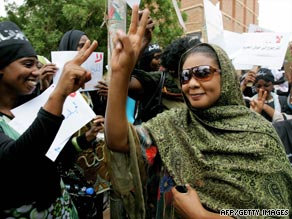 Lubna al-Hussein had faced 40 lashes for wearing pants deemed too tight and a blouse considered too sheer. The threat of lashes was dropped when a court found her guilty but ordered instead that she pay a fine.

"She is now in jail," her attorney Nabil Adib told CNN. "She refused to pay the fine as a matter of principal."

Al-Hussein will appeal her verdict in an effort to have the conservative Muslim government's decency law declared unconstitutional, Adib said by phone from Khartoum.

Watch what outfit brought the charges »

"We intend to file an appeal within the next three days, but we do not know how long it will take the court of appeals to decide on the case," Adib said. "We expect it will happen in the next two to three weeks."

He said al-Hussein could be in jail for a month unless her verdict is overturned.

Al-Hussein, who was arrested in July, pleaded not guilty during her one-day trial Monday, he said. She was not allowed to call defense witnesses or present a defense case, he added.

She was sentenced to pay 500 Sudanese pounds ($209) or face a month in prison, starting immediately, the lawyer said.

"She thinks that she did not have fair trial and a conviction was wrong so she did not want to pay the fine nor let anyone else pay on her behalf," Nadib said.

Al-Hussein, a journalist who worked in the media department of the United Nations mission in Sudan, resigned from her U.N. position in order to waive her immunity as an international worker and face trial.

Sudanese security forces roughly handled scores of al-Hussein supporters, injuring some and detaining 47 women, according to an eyewitness who spoke to CNN by phone.

A Sudanese official accused "the West" of interfering in the case.

Mohammed Khair, the information attaché at the Sudan Consulate in Dubai, said the international campaign surrounding the case "proves the West contributes only toward deepening (the) crisis."

The human rights organization Amnesty International had previously called for the charges to be dropped.

"The manner in which this law has been used against women is unacceptable, and the penalty called for by the law -- up to 40 lashes -- abhorrent," Tawanda Hondora, deputy director of Amnesty International's Africa program, said in a statement.

Join the discussion on this story on Connect the World on CNNI TV.
Weekdays at 2000 GMT

Al-Hussein was arrested along with 18 other women on July 3 at a Khartoum restaurant when police burst in and checked women for their clothing.

"I don't think she was targeted specifically," Adib said. "They attack public and private parties and groups. They are called 'morality police' and she was just a victim of a round-up." Put your questions to Dutch activist Ayaan Hirsi Ali here

At the time of her arrest, she said, she was wearing pants, a blouse and a hijab, or a headscarf worn by Muslim women.

Scores of protesters gathered outside the courtroom in Khartoum to support al-Hussein in early August, when she was last scheduled to be tried.

The demonstrators carried banners and wore headbands with the messages, "No return to the dark ages" and "No to suppressing women." Others demanded an amendment to the country's public order law that human rights activists say is vague on what constitutes indecent dress.

U.N. Secretary-General Ban Ki-moon has said he is concerned about al-Hussein's case.

"The United Nations will make every effort to ensure that the rights of its staff members are protected," Ban said in July. "The flogging is against the international human rights standards. I call on all parties to live up to their obligations under all relevant international instruments."

In addition to the group of lawyers defending her, al-Hussein was also represented by two Egyptian defense attorneys, she said.

CNN's Raja Razek and Elham Nakhlawi contributed to this report.

All About Sudan • Amnesty International