Norwegians sentenced to death in Congo

By Per Nyberg
For CNN

(CNN) -- Two Norwegian citizens were sentenced to death Tuesday in the Democratic Republic of the Congo for espionage, murder and attempted murder, Norway's Ministry of Foreign Affairs has confirmed to CNN. 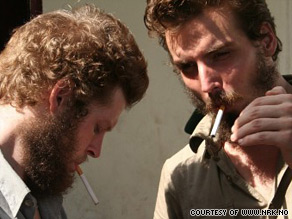 Joshua French and Tjostolv Moland have been sentenced to death and have five days to appeal.

Asked about the sentence, Lambert Mende Omalanga, Congo's minister of communications, told CNN, "We don't have a habit of commenting on judicial decisions."

However, Omalanga said, his country has not carried out the death penalty in 10 years. He said lawmakers in parliament are in the process of trying to take the law off the books.

A military court in Kisangani found Tjostolv Moland, 28, and Joshua French, 27, guilty on all charges, Norwegian TV2 reported. The court also ordered the pair to pay $60 million in damages.

The men have five days to appeal their sentence, the Norwegian Ministry of Foreign Affairs told CNN. It was not clear why the men were in Congo.

"I have earlier made absolutely clear that these two have not been conducting business for Norway in any shape or form," Norwegian Minister of Foreign Affairs Jonas Gahr Store told Norwegian state television NRK after the verdict.

"We will now read through the sentence to see exactly how it is written," Store added.

Norwegian authorities have been following the trial closely on television, and have tried to keep a balance between respecting the judicial system of a different country and helping Norwegian citizens in trouble, Store told NRK.

The two men were found guilty of spying for Norway and for killing a driver in May, according to NRK.

In an earlier statement on the Norwegian Ministry of Foreign Affairs Web site, the ministry said that if the two Norwegians were to receive the death penalty, Norwegian authorities would immediately try to seek assurances from Congolese authorities that the death sentence would not be carried out.

"Norway has a very strong stand on the death penalty, and we are very much against it," a Ministry of Foreign Affairs spokeswoman told CNN.

Images on NRK TV showed that after the sentence against the two men was read, applause broke out in the courtroom.

All About Democratic Republic of the Congo • Norway