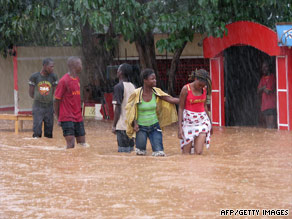 The worst hit have been Burkina Faso, Senegal, Ghana and Niger, said Yvon Edoumou, a spokesman for the U.N. Office for the Coordination of Humanitarian Affairs, or OCHA, in the Senegalese capital, Dakar. So far, 159 people have died, he said. Sierra Leone has also been hard hit, according to the U.N.

Edoumou said removing water from flooded areas is a top priority, but powerful pumps are in short supply.

"Some people refused to leave their homes so they are living in floodwaters," he said.

The United Nations has not yet received reports of waterborne diseases, but Edoumou said a real threat exists of diarrhea or, worse, cholera.

The U.N. World Food Programme said Tuesday it has begun distributing food to tens of thousands of homeless flood victims.

WFP has set a goal of feeding 177,500 people, mainly in Ouagadougou, the capital of Burkina Faso, where 150,000 people have been affected and key infrastructure -- including a central hospital, schools, bridges and roads -- has been damaged.

The flooding in Burkina Faso is the worst in 90 years, WFP said.

Many of those in Ouagadougou most needing help were already receiving aid from WFP, but those rations were lost in the floodwaters, the U.N. reported.

"It is always the poor and vulnerable who suffer the most from floods like these as their few remaining assets are swept away, leaving them hungry and destitute," WFP Executive Director Josette Sheeran said.

Roads and buildings have been ruined from Mauritania to Niger, the U.N. reported. In Agadez, Niger, a town about 458 miles (738 km) north of the capital, Niamey, close to 988 acres (400 hectares) of vegetable crops and hundreds of livestock were washed away.

"The situation is very worrying," he said in an OCHA statement issued Tuesday.

The rainy season in West Africa begins in June and continues through late September. In 2007, 300 people died and 800,000 were affected by the storms.

Despite the misery, Edoumou said the rains are a mixed blessing for countries dependent on agriculture. The harvest this year will be more bountiful, he said.