KAMPALA, Uganda (CNN) -- At least four people have been killed in two days of rioting in Uganda's capital after radio broadcasts encouraged listeners to violently take to the streets against the government, officials said Friday. 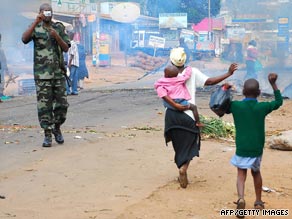 The rioters heard "sectarian" broadcasts on Thursday that "systematically incited the listeners to cause chaos and destruction wherever they could," said a statement issued by Minister of Information and National Guidance Kabakumba Masiko. It described those who took part in the rioting in Kampala and its suburbs as "marauding thugs."

The broadcasts aired in the Buganda Kingdom, said police spokeswoman Judith Nabakooba. Ethnic and political tension between the kingdom and the central government had been escalating over the past few weeks.

Police and army officers were injured and police-owned property also was damaged along with other vehicles and shops, said the nation's police chief, Maj. Gen. Kale Kayihura.

In Natete-Ndeba, a southwest suburb, a police station was looted of its ammunition and prisoners set free before rioters burned the prison, Nabakooba said. A curfew has been declared in the suburb, and in Kampala the army is providing support to police, said Kayihura.

A doctor at a Kampala hospital said more than 50 people had sought care there, most with broken bones, but others had cuts and gunshot wounds.

About 60 people were arrested in Kampala, but arrest totals in the surrounding areas were not available, Nabakooba said. Four radio stations were ordered shut down, Masiko said.

Many of the rioters were Baganda between the ages of 18 and 35, Nabakooba said. The Baganda are Uganda's dominant ethnic group, making up about 16.9 percent of the population, according to The CIA World Factbook. The kingdom is one of the oldest monarchies in Africa. The people live mostly in central Uganda and along the shoreline of Lake Victoria.

Tension between the Buganda Kingdom, headed by King Ronald Muwenda Mutebi II, and Uganda President Yoweri Museveni had been increasing recently over land laws, sovereignty and political power, issues over which the two sides have been in talks for years. The Uganda government sees Mutebi as a traditional leader only and does not allow him to participate in politics.

Further estranging the two is a breakaway faction of the Buganda Kingdom, the Banyala. Some interpreted police forces' breaking up a group of Baganda amid preparations for festivities as support for the Banyala, especially after a Banyala demonstration opposing the Buganda Kingdom prompted no police action. It is unclear why the police broke up the Baganda group earlier in the week.

Riots broke out after the incident, and again when radio announcers pushed Baganda to take to the streets again.

Museveni said in a broadcast statement that he tried to contact Mutebi to discuss the issue as "mature people" but he could not reach him on the phone. The president also said that he had intelligence reports showing that the Buganda Kingdom has received foreign funding to carry out a hate campaign against the government.

Although officials said the broadcasts encouraged listeners to put into action their contempt for the government, during such outbreaks of violence Asians are often targeted. Some view Asians as being most protected by the government because of special holidays or tax benefits they may get. In addition, reports of Asians mistreating natives have fueled tension between the groups.

None of the four people killed were Asian or of Asian descent, Nabakooba said, but in the northern suburb of Kawembi about 30 Asians had fled to a police station for protection on Thursday and remained there Friday.

Samson Ntale contributed to this report for CNN.