KAMPALA, Uganda (CNN) -- At least 21 people were killed and more than 80 others injured during three days of rioting here last week, a police spokeswoman said Monday. 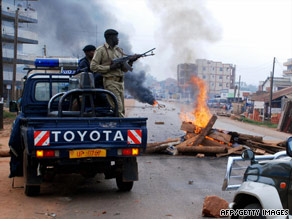 Ugandan police ride past a burning barricade in the Natete suburb of Kampala on Friday.

President Yoweri Museveni is to address the violence in a speech to parliament slated for Tuesday afternoon.

Though the mood on the streets in the capital city was calm Monday, tensions between Museveni and the Buganda kingdom -- headed by King Ronald Mutebi II, the ruler of the Baganda tribe -- have intensified in recent years. They erupted into violence last Thursday, when the government said it would not allow the king to travel to an area inhabited by a renegade rival group.

Kings in the east African nation are limited to a ceremonial role overseeing traditional and cultural affairs. Government officials and the Buganda kingdom have been at odds for years, sparring over land, sovereignty and political power.

After the travel ban, mostly young Bagandans took to the streets, stealing ammunition from a police station and confronting officers, accusing them of harassment.

"The government is wrong to undermine cultural institutions, which are the backbone of Uganda's heritage," said Mzamiru Balidha, a resident of Kampala. "Cultural leaders must be left alone since they are not interfering in politics."

Rioters burned tires and cars, set buildings afire and looted stores. Streets in the capital were strewn with debris over the weekend, including torched cars and burned tires.

By Sunday, police and the army were patrolling deserted streets as residents tried to return to normalcy after the protests.

"I'm happy to see that there is peace now," said Harry Sagara of Kampala. "Now people can return to work."

A government official said Sunday that the two leaders have pledged to meet and address their differences.

"Both the central government and the king are still working out details of the meeting," said Daudi Migereko, the minister of parliamentary affairs.

In Washington, the U.S. State Department cautioned Americans in Uganda about the potential for more violent demonstrations this week.

"U.S. citizens should be aware that even peaceful gatherings and demonstrations can turn unexpectedly violent," the State Department travel alert states.

Bagandans are the dominant ethnic group and one of four ancient kingdoms in the nation.

Journalist Samson Ntale in Kampala, Uganda, contributed to this report.